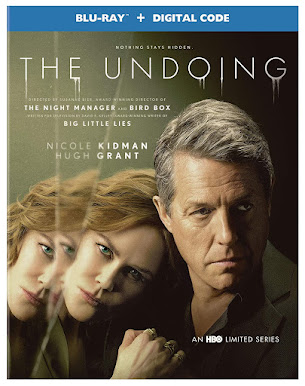 David E. Kelley creator of Big Little Lies comes back for another HBO series the murder-mystery The Undoing. The film centers around two attractive wealthy New Yorkers Jonathan Fraser a famous children's doctor and Grace Fraser a therapist. The two have a bright healthy son named Henry (Noah Jupe) and seemingly the perfect life. However, the mother of one of Jonathans patients is murdered and it comes to life that Jonathan was having an affair with her. Of course this paints Jonathan is the number one suspect but could it be someone else?

As I said from the outset this is going to be a spoiler free review. Kelley crafts a whodunnit for the modern times and, it being Kelley also provides a heaping helping of drama showcasing pretty rich white people with problems. The Undoing is a good show that is compelling but also one that I think could have maybe had a shorter run and been more effective for it. Still, I think to Kelley's credit the characters are well developed and there are enough twists and turns to keep it for the most part very engaging. Heavy hitters like Kidman, Grant and Sutherland are truly firing on all cylinders here and whatever you may feel about some of the plotting you cannot deny the level of acting on full display.

The Undoing came at a time when we are still locked down and distancing and, which is way I think I maybe forgave some underwhelming plotting and under written characters. It served it's purpose as a solid mystery with a stellar cast.

Picture: Being a newer series its not a shocker that Undoing looks great in 1080p. Oscar winning cinematographer Anthony Dod Mantle really gives this show a scale and scope that befits it and in HD it looks dazzling. The image retains a lot of detail in terms of clothing, clothing textures, locales and sets.

Sound: The Undoing has a really great DTS 5.1 track. The series score by Evgueni and Sacha Galperine is fantastic and really comes making for a sharp robust sound experience. Same with dialogue and sound design and effects. This 5.1 packs a big punch and is overall really nicely done.