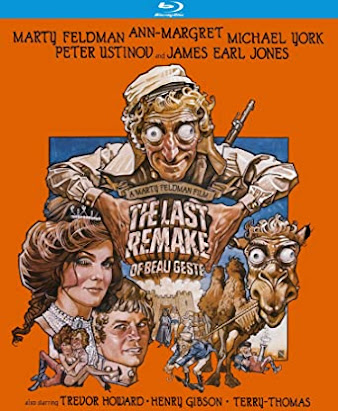 Disclaimer: Kino Studio Classics has provided me with a copy of this film free of charge for the purposes of review. All opinions contained within are my own honest reflections.
Marty Feldman had made a name for himself in writing since the late '50's but, lets face it we all remember him for his role as Igor in Mel Brook's seminal spoof Young Frankenstein (1974). Much like Tiny Tim, Marty became a cult-icon in the counter-culture '70's for his shall we say unconventional bug eyes and dry sardonic wit. The Last Remake of Beau Geste marks the first of only two films the legendary Feldman actually directed as well as wrote and acted. A stolen diamond is at the center of this zany comedy-adventure starring Marty Feldman as Beau Geste.
The film is a nice mix of sight gags similar to the Zucker brothers (Airplane!) but has a nice twisted surreal sense of humor ala Monty Pythons. But, Last Remake isn't too surreal that it's alienating to a more mainstream audience. The movie is one big send up adventure and foreign legion films. I will say that the humor for the most part works with gags that fly fast and there is even a silent film tribute scene that is brilliantly executed. There are also some really gut-busting meta jokes and running gags that left me in stitches. Having said that, I think that even though Feldman has is own style in both writing and directing I couldn't help but think Brooks was better in terms of a more polish in the story department. Also, some ethic stereotyping abounds.
As I said The Last Remake of Beau Geste is the first and only two movies Feldman directed but of course also stars in. For as goofy as Feldman looks his acting is rather under-stated which I think helps balance out the more over-the-top characters. Geste features a top-notch supporting cast including Michael York (Austin Powers), Ann-Margret (Bye Bye Birdie), Henry Gibson (The 'Burbs) and James Earl Jones (Star Wars).  It's a credit to Feldman's directing that he is able to take such big talents and get them on the same age with the tone of the material.
The Last Remake of Beau Geste is a side-splittingly funny send-up that blends the sight gags of Airplane! with the British surrealism of Monty Python.
Picture: Kino once again provides a stellar HD presentation with Last Remake. Indoor scenes look great but its really when you have the outdoor locales that you really see how this image retains a lot of detail and clarity. The image does have a few blurring moments and these are very minor and do not, in my opinion detract in the least. In fact you might not even notice if you weren't on the look out for such things. Color overall is nicely balanced and maintained throughout.
Sound: Last Remake offers up a very solid DTS 2.0 track. Dialogue comes through nicely with no unwanted background noise or drop outs.
Extras: Beau Geste has a nice array of extras. This includes two audio commentaries: Film Historian/Screener Alan Spencer and a commentary by Entertainment journalist/author Bryan Reesman. Also includes an audio-interview with co-star Michael York. York gives an engaging account of the film and is certainly worth the listen. Rounding out the features is a Trailers from Hell trailer/Alan Spencer. Also includes original trailers.
Posted by The Video Attic at 9:21 AM