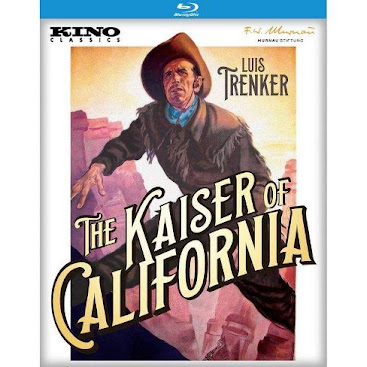 The 1936 film The Kaiser of California also known as The Emperor of California remains an interesting and curious footnote in German cinema as it was the first and only Nazi era film with scenes shot in America. The story tells of John Sutter a man fled his country and made his way to America where he made his fortune from the Gold Rush.  As you can probably tell, The Kaiser of California is a typical telling of America's Gold Rush and how John and others found both highs and lows. However this is not to suggest that this is a typical movie. Clearly made on a large budget, Kaiser tells the story of Sutter in a very grounded and interesting way. Sure, the movie takes a lot of liberties and, as would expect amps up John's German  roots. Given the films resources the filmmakers can tell the story with a bigger scope and scale. Set pieces and sequences are extremely well crafted and the movie has a nearly breathless pacing at times.
The photography and the way the western landscapes are still awe-inspiring decades later and, I have no doubt in my mind this movie was an influence on the likes of John Ford. Here we also get great techniques  like dissolves, tracking shots etc. I think what also helps this film a lot of its star Luis Trenker who does double-duty as both director and star. Trenker has a great deal of charm and leading man good looks. It's strange to think that Trenker never tried to make it in Hollywood as I think he could have been both an excellent director and or leading man.
Whilst I doubt this movie that is on your radar I think should be because its an extremely well crafted film which I found very engaging. Every film buff should make The Kaiser of California a must-watch.
Picture: Kaiser sports a new 2k scan by the Fredrich Wilhelm Stiftung, The film looks stunning for being near one-hundred years old. The image has a nice level of clarity and sharp contrast with the black-and-white footage. Grain is consistent and heavy at times but it never gets distracting. As sharp as most of the scenes are it does have its flaws with some flickering (very minor though) and artifacts and scratches. Again, this movie is incredibly old and I think that you have to take in consideration the the condition of the material. The overall image is great and you can tell that this movie probably never looked as good and, I highly doubt it will look better.
Sound: Kaiser has a very nice 2.0 track. The films dialogue and sound design comes through nicely with very little in the way of background hiss.
Extras: The Kaiser of California has a feature length commentary by historian Eddy Von Muller.
Posted by The Video Attic at 7:47 AM