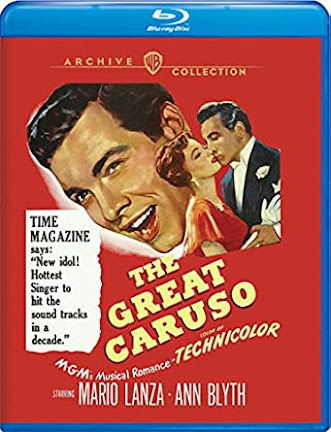 Disclaimer: Warner Archives  has provided me with a copy of this film free of charge for the purposes of review. All opinions contained within are my own honest reflections.

As of late Warner Achieves have given lovers of Golden Age Hollywood musicals something to sing about with a recent string of releases. Here we get the classic 1951 The Great Caruso starring the legendary Mario Lanza. The film documents the life and career of Italian singer Enrico Caruso from his humble beginnings signing for mere pennies to becoming an well paid international superstar. The artist suffers the highs and lows in the business and in love. As some of you may know I have been pushing myself to watch more musicals, especially of the Golden Age variety. What drew me to the Great Caruso is that I know very little about Enrico Caruso only that he was a pretty legendary crooner in his day. Also, I had never seen a film with Mario Lanza who prepares the Caruso of his era. Lanza died young at only thirty-eight years old. Knowing this watching the film I feel gives this extra air of tragedy of a bright talent gone way before his time.
I have to say that despite not being the knowledgeable on either Caruso or Lanza I could not help but be utterly spellbound by this film. The story dazzles and has the benefit from a script by William Ludwig and Sonya Levien both of whom won Oscars for their work on Interrupted Melody (1955) and would also find much acclaim with films like Oklahoma! (1955)  Caruso is one of those big lavish expensive productions that, a decade later would all be replaced by counter-culture cinema that was more stripped down and raw. But, this movie is anything but and four time Oscar winning photography Joseph Ruttenberg gives this a grand in its scope fitting for the icon it portrays. And, least we forget that the costumes are breathtaking (and nominated at that years Oscars).
The film is of course populated by amazing talented actors with Lanza proving not only can he sing but he has that star making charm that translates so well on screen. Ann Blyth (Mildred Pierce) also has a lot of talent and natural ease that makes her an equal to anyone she shares a scene with. The supporting cast includes Carl Benton Reid and Alan Napier.
Big, bold, beautiful tragic and simply unforgettable, The Great Caruso is a movie that shines with so much talent in front of and behind the camera. Its a pleasure to watch singer Mario Lanza completely transform into the role.
Picture: Once again Warner Archives truly delivers in stellar picture quality. The photography of Joseph Ruttenberg is celebrated with a nicely balanced color palate that has a great deal of depth and retains a lot of details. Things like clothing textures, locales, set-pieces come to vivid life. Grain is very fine, smooth and consistent throughout. If you have this on DVD it is well worth upgrading because I doubt this movie will ever look better.
Sound: Seeing how this is a musical the sound is paramount and, like the picture transfer Great Caruso really impresses. Here we have  DTS 2.0 track that in my opinion packs a powerful punch. The music comes through strong and robust (I even found myself turning it down abit in places). Dialogue and sound design also come through nicely with no background hiss or unwanted noise that I could detect.
Extras: The Great Caruso has a documentary Mario Lanza: Singing to the Gods (58min) and an original theatrical trailer.
Posted by The Video Attic at 10:58 AM