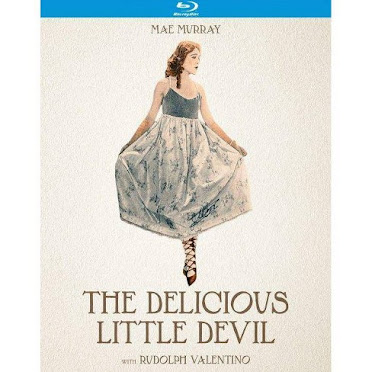 1919's The Delicious Little Devil tells the story of a hat check girl named Mary (Mae Murray) who is fired from her job and ends up as a dancer at a club called the Peach Tree Inn. When a rich man falls in love with her this quickly turns into a farce of duel identities as Mary masques as Gloria de Moine.  Director Robert Z. Leonard is probably best remembered for films like The Great Ziegfeld (1936) and, the early talkie The Divorcee (1930) which won Norma Shearer an Oscar. But the director had been working since 1913 and, 1919's The Delicious Little Devil shows a maturity within the medium even in its early days. The film features sophisticated for the time film narrative devices such as flashbacks and intercutting from different times in the present.
Despite the title, this Pre-Code film is rather on the tame side outside of one shot of partial nudity (from the side). The movie is more of an over-the-top farce which, would later morph into the screwball comedy. Indeed, this could be easily seen as a proto-screwball as it involves a love triangle, an absurd identity scheme and some crazy antics. The lead star Mae Murray is doing her best Mary Pickford and I think is great here. Sadly Murray was one of those starlets that burned bright and faded just as fast. Though she lived to the ripe old age of 75 she ended her career shortly after the advent of talkies. It's a shame she made so little films as she clearly has both the looks and talent. Here she shows off her physical comedy as well as charms. This movie may well have sank into total obscurity had it not been for an early film for the silent superstar Rudolph Valentino. Valentino has a thankless role and this would be right before he would reach international fame with films like The Sheik (1921), Blood and Sand (1922) and The Eagle (1925).
The movie lacks a strong narrative through line, something that a lot of early movies struggled with. Certain characters feel sidelined or altogether wasted. Motives are also a bit sketchy at best.  That is not to suggest however that this is a bad movie, in fact its a lot of fun. As I said this feels very much like a '30s screwball comedy and, its kind of shocking that this was never remade. It would have made a perfect vehicle for Carole Lombard in the Mae Murray role. Where this movie lacks in screenplay polish it makes up for in zany comedy and Murray truly dazzles in the leading role. And, as I said even early in his career Robert Leonard knew how to put together a strong film. His skills at storytelling would only mature throughout the '20s and reaching its peak in the '30s. A worthwhile movie for comedy fans. It a real shame that Murray could not have taken on the mantle of comedies such as Buster Keaton Charlie Chaplin or Harold Lloyd.
Picture: Little Devil comes to home video by way of a new 4k scan. The movie, which is now over one-hundred years old, looks great. Kino has restored the color tints and the film has retains a great deal of clarity. The movie is not pristine but considering the films age the overall transfer is impressive.
Sound: Little Devil includes a 2.0 Mono track. Much like the picture transfer the sound is impressively done. True, there is no dialogue but there is very little to no background hiss or noise that I could detect. The score comes through nicely as well.
Extras: The feature film has a commentary by historian Gaylyn Studlar. This  track that is filled to the brim with great information and should be considered a must-listen to
This also features News reel footage of Rudolph Valentino's funeral, Orson Welles Remembers Rudolph Valentino, A alternative score by Nora Kroll-Rosenbaum and trailers including Blood and Sand (1922).
Posted by The Video Attic at 9:48 AM