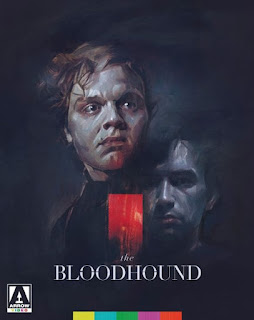 The Bloodhound (2020) marks Patrick Picard's feature film debut. A young man named Francois (Liam Aiken) after finding himself without a place to live decides to visit his friend Jean Paul (Joe Adler) in his big house. But, Francois isn't sure which is stranger Jean Paul of the creepy house. Meanwhile, Jean Paul's twin sister Vivian (Annalise Basso) is also living there but she is shut up inside her room. The two try to re-connect but Jean's behavior grows more erratic.
The Bloodhound is a movie that is going to split audiences right down the line. Some are going to see this as a creepy slow-burn film whilst others are going to dismiss it as pretentious garbage. The first time I watched this I won't lie think I saw myself in the latter camp. And, indeed the film's dialogue does ring out like a film student with lofty ambitions. But, I have to say on my second watch I come to respect the films dread-filled melancholic, even nihilistic viewpoint. The movie isn't so much about narrative as much as it is a mood-piece. This is something that director David Lynch excels at and, this movie reminds me of a Lynch film. Cinematographer Jake Magee does an excellent job at giving this low-budget film scope and depth. The way Magee uses tracking shots and compositions is masterful and, mark my words this guy is going to win an Oscar someday.
In my opinion the most interesting aspect of the film is how we get to see a depiction of male-friendships that is rocky and dis-connected. Any time we see male friends in film or television its typically the light-hearted bromance variety. Here we see two childhood friends struggling to connect with one another even though the one friend (Jean Paul) is in desperate need of it. I also love the fact that this movie is horror but more of the psychological kind. There is a stalking dread in the film but its not from any monster or ghost but rather of isolation and loneliness.
I think that in a way the low-budget both helps and hurts Picard's debut film. Having a limited budget for the most part pushes filmmakers to be more creative and here we get a strange, waking dream like quality without a lot of flash or gimmicks. If you gave this filmmaker a bigger budget to someday remake this movie I would love to see it as a period piece in a big gloomy estate. Indeed, I think the modern setting clashes with the films Poe-inspired feel. Joe Adler's sickly Jean Paul seems tailor made for a turn-of-the-century setting. While I think the house in the film is moody I don't think it quite achieves the atmosphere you could get with a big grand house. This is where we start to see the budgetary limitations.
Joe Adler is maybe my favorite thing about this movie. His pale, dry-witted and sardonic Jean Paul is both well acted and fully realized as a character. He seems to be relishing his role yet, thankfully he never takes it into the realm of overboard. Liam Aiken in a way has the more challenging role. He is basically the less-flashy straight man and POV character but, is equally important to the story.  Aiken, like Adler never hams it up and gives the character real pathos. Annalise Basso has a very small but memorable role as the largely unseen Vivian.
The Bloodhound does have some pretention behind it but I think it has something to say and the movie is interesting and engaging enough to keep me fully invested. At just a scant seventy one minutes  delivers a palpable, unnerving film with a devastating finale. Patrick Picard is a name to look out for.
Picture: Bloodhound looks great in 1080p. The movie has a soft, semi-muted color palate and the overall film looks sharp, clear and really showcases Jake Magee's photography.
Sound: Bloodhound has a really nicely done DTS 5.1 track. The film has some great sound design and this film delivers the goods. Really great stuff.
Extras: Bloodhound has a nice array of features which includes: A feature length commentary by Picard and editor David Scorca. Also includes On the Trail of the Bloodhound: Behinds of a Modern Chiller (45mins). We also get the four short films that Patrick directed: Bad Dream, The Muffled Hammerfall in Action, The Mosaic Code, Wiggleworm. This also includes a nice booklet with new writings from Anton Bitel and a director statement from Patrick Picard.
Posted by The Video Attic at 11:37 AM