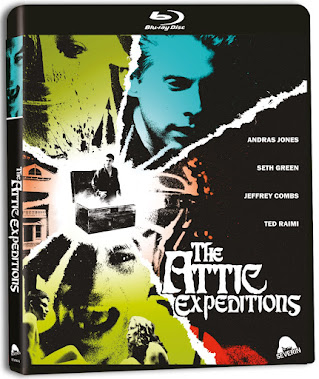 A young man named Trevor (Andras Jones) awakes in an insane asylum with seemingly no memory of how he got there. It turns out that he murdered his wife in a ritual. Things go from weird to horrifying as Trevor must piece what's fantasy and blood reality in this strange horror thriller. It seems fitting that Jeremy Kasten's film makes it HD premier seeing how the movie turns twenty this year and, The Theater Bizarre a project Jeremy worked on also made its US HD debut. This is also the very first time I watched this movie, having always been curious based on the title and, seeing this has Seth Green in it. What is great about this movie is it hooks you right away with a palpable air of mystery and Kasten always seems to keep the audience off balance at all times.
Andras Jones heads up the rather cast and whilst he gives the film his all I found his performance a little on the flat side. Jeffery Combs is of course a lot of fun and seems to be enjoying hamming things up whenever he can. He's basically Herbert West here. Ted Raimi is paired with Combs and the two seems to be having a blast riffing off of one another. Other notable cast include an early screen role for Seth Green and a cameo by Alice Cooper.
Its clear that the movie was going for a layered deep Lovecraftian blood-soaked nightmare of murder and madness. However, whilst I do admire Kasten's ambition I think that the narrative is aimless and the screenwriting isn't polished enough to pull off a clever Shutter Island meets the Dark Ones. As I said the movie certainly has its charms and the movie worth watching for Combs alone. A splatter caked little outing that is engaging and unnerving.
Picture: The Attic Expedition is presented in 1:78:1 aspect ratio. For a movie that is now twenty-years old Attic looks great. The color has a nice vivid look to it, especially in darkly lit scenes. The film retains a lot of details in clothing, locales etc. A overall very nice looking HD presentation.
Sound: The Attic Expedition has a really nice robust DTS 5.1 track. This offers in my opinion a very complex 3D sound experience. Music and sound design really pack a punch and makes for a overall great presentation.
Extras: As always Severin has provided some nice new features for this release. This includes: Cast & Crew 20 Year Pandemic Reunion & Story of Making THE ATTIC EXPEDITIONS, featuring Jeremy Kasten, Seth Green, Jeffrey Combs, Tim Heidecker and more, Alice Cooper and Jeffery Combs Internet Reunion, Horror scholar Adam Rockoff on Attic Expedition.
Posted by The Video Attic at 9:59 AM