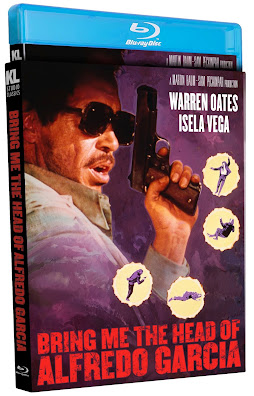 Disclaimer:  Kino Studio Classics has provided me with a copy of this film free of charge for the purposes of review. All opinions contained within are my own honest reflections.

Please Note: I have not seen nor reviewed the previous HD release of Alfredo Garcia from the label Twilight Time released in 2016 nor the Arrow Region B release. So, I wont be comparing the three in terms of sound/picture quality.

People like Dennis Hopper, Peter Fonda and Sam Peckinpah helped smash the doors down of Old Hollywood. Gone were the big lavish musicals and multi-million dollar biblical epics all of which were geared towards a older audience. With the guns a-blazing and bloody bodies of 1967's Bonnie and Clyde and the bullet ballet that was Sam Peckinpah's The Wild Bunch (1969) and, of course the counter-culture biker odyssey Easy Rider (1969) Hollywood was seeing big changes. Bring Me the Head of Alfredo Garcia continues that tradition. A grizzled bar room pianist named Bennie (Warren Oats) along with his girlfriend Elita (Isela Vega) go in search of a bounty on a man named Alfredo Garcia with the proviso that his head be brought back as proof. The search and reason for Garcia ending up in this spot leads to a blood-splattered insane journey in this '70's classic.

I admit that when I first saw Bring Me the Head of Alfredo Garcia (which was sometime in high school) I didn't get the film and its message and thus I dismissed it and moved on. However, when I got a little older and my taste in cinema matured  I thankfully decided it was time to re-visit it. And, I'm glad I did because the movie really opened up for me having now seen it in a new light. Alfredo Garcia is a rough-tough nihilists movie which tends to be off-putting to a lot of people. It also further alienates its audience with unlikable characters and a very non-traditional story-arch. But, its for these reasons not to mention the films wickedly wonderful black humor that makes this movie very special.

Warren Oats has the right mixture of anti-hero world-weary and rogue charm that he is able to pull off a character that is maybe not likable but still engaging as hell. Oats its worth noting is doing his best Peckinpah impression, complete with sunglasses. As brilliant as Oats is I think its actor Isela Vega that truly offers the film its beating heart. And, its why I think the latter half of the movie has the impact that it does.

Its hard to describe this movie to newcomers only to say its a hot, sticky and smoke hazed road movie fueled solely on madness, murder and revenge. I can honestly say there is really nothing like it before or since. This movie is certainly not going to be for everybody but if you are adventurous  and love to explore the early-counter-culture/western-noirs I implore you to give Bring Me the Head of Alfredo Garcia a ride.

Picture: The opening outdoor scenes of Alfredo Garcia in my opinion sum up this restoration. It's lush, vivid and retains a great deal of detail without feeling blocky or dull. The film has a rather dark at times color palate and I think that this has a nice up-tick in color and sharpness. The film has some minor artifacts present. Grain is not too heavy here and is consistent throughout. I also love how the movie retains this warmth in certain scenes, whereas in SD this would just look dark and muddy. Overall, a really good looking transfer.

Sound: Garcia has  DTS 2.0 track. The soundtrack is front channel heavy but, in my opinion still offers a nice big sound. Dialogue comes through nicely with no drop-out or unwanted background noise.

New to this release is the Trailers from Hell trailer with Josh Olson. Rounding out the features is TV Spots, Trailer and Image Gallery.