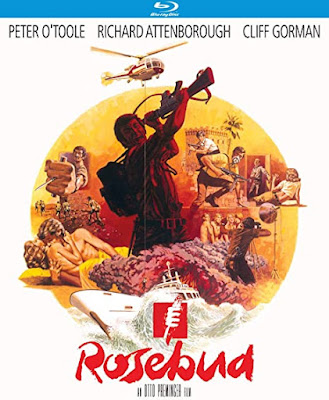 Rosebud from 1975 marked the legendary director Otto Preminger's second to last feature film. The film sees five young women from powerful political families kidnapped by a radical extremist group. Larry (Peter O'Toole) is brought in to discover the location of the girls and free them whilst also taking down the head terrorist Edward Sloat (Richard Attenborough). So, I had actually never heard of this film prior to its release from Kino. But, how can you say no to a cast that includes Peter O'Toole, Richard Attenborough and Cliff Gorman. Not to mention from Otto Preminger such a well regarded filmmaker.
While Rosebud has an interesting premise and set-up frankly, I found the movie to be somewhat of a slog to get through. Preminger delivers an overly long, bloated film that lacks the kind of lean and engaging storytelling that his contemporaries like Brian De Palma and Martin Scorsese were putting out. Its not to say this movie has no merit and there are glimpses of interesting plotting and truly harrowing moments but sadly, this gets lost in the boring parts. The overarching narrative deals with religious extremists and, I felt like this movie alienates the audience members that maybe have little to no knowledge about such matters. A good movie can engross you in this world yet Rosebud made me feel uninterested and disengaged.
As I stated above this movie has a fantastic cast and is really one of its saving graves. Peter O' Toole, what can you say besides being amazing in whatever he's in and, in part he helps elevate the material. Richard Attenborough also a legend in the field has a small but very memorable role and like Toole can seriously make anything he's in better. Cliff Gorman who sadly passed away way too young also shines in a supporting role.
This movie really feels like the end of an era, not only for Preminger but the rise of younger bolder filmmakers that George Lucas, Stephen Spielberg, Francois Ford Coppola. I thought Rosebud was going to be a film similar to The Great Escape which balanced heavy subject matter with a fast-paced popcorn style enjoyment. But, rather this is a slow moving cruise that feels sadly feels like a director that isn't trying to be exciting or innovate.
Picture: Rosebud opens with some very nice locale shots. Here we can see the film has a nice balance of color and retains a great deal of clarity throughout. There tends to be some blurring and some artifacts in the print but overall nothing that I feel detracts from the overall presentation. Grain is nicely consistent throughout as well and is for the most part not heavy.
Sound: Rosebud has a DTS 2.0 track. This front heavy track is solid with dialogue coming in clearly. No hiss or unwanted background noise is present.
Extras: Rosebud includes a feature length commentary by Filmmaker/Historian Daniel Kremer. Though I was still not a big fan of this movie, Kremer did point out a few things that helped me connect to the material. Engaging and as always I find Kremer to be well researched. Rounding out the features is original trailers.
Posted by The Video Attic at 11:20 AM