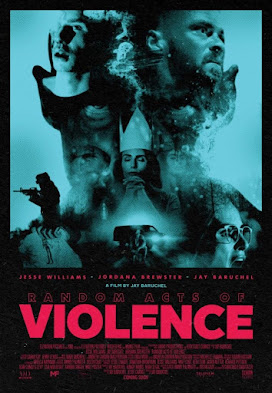 Disclaimer: RLJE has provided me with a digital copy of this film free of charge for the purposes of review. All opinions contained within are my own honest reflections.

Comic book writer Todd (Jessie Williams) is finally putting to bed a infamous slasher character based on a real life serial killer. During a press tour he, his co-writer Ezra (Jay Baruchel) and Todd's girlfriend (who is also writing a book at the victims of the real life murders) murders start to happen, very much like those based on the Todd's comic. Now the creator must face his creation. Actor Jay Baruchel is probably best remembered for movies like Tropic Thunder (2008), This is the End (2013) and, the hugely popular How to Train Your Dragon series. Recently the actor has branched out into directing. Random Act of Violence based on the one-shot 2010 comic of the same name is his second feature as director.

Random Act of Violence is, like a lot of movies lately in that they have interesting concepts behind them but lack the polish to make them special. Baruchel plays with themes of serial-killer exploitations, fandom, and, more specifically fandom of slashers both real life and fictional. These are some highly effective and provoctative topics. What left me frustrated is these subjects are only lightly touched upon and never to a degree that's truly effective or challenging.  Moreover, the narrative is a hodge-podge of horror troupes and a smattering of pretension via a finale narration. Not to mention the movie has some glaring plot holes that are hard to ignore. I can't mention them without spoiling it however. If you love splatter this movie delivers it in buckets full, yet, if you are looking for a timely and interesting take on fandom, comics, serial killer culture, this movie is utterly devoid of it. Sadly, Random isn't even just a fun mindless movie as the tone and story takes itself far too seriously for that.

Random Acts of Violence aims for something deep but only ends up coming off as a cold and shallow movie that isn't as smart as it thinks it is.