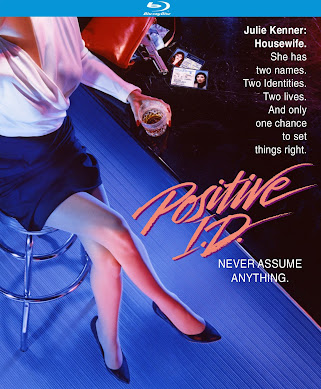 Disclaimer: Kino Studio Classic has provided me with a copy of this film free of charge for the purposes of review. All opinions contained within are my own honest reflections.
Warning: This movie involves sexual violence towards women.
Housewife Julie Kenner (Stephanie Rascoe Myers) is still suffering from the emotional scars of being sexually assaulted by a man, who we later find out is in the mafia. Still being judged by the media and her small community she starts to assume alternate identities as a way of escaping it all. She also finds out she can make some extra money as well. Things start to spiral however when Julie finds out that the man that assaulted her is being released and starts to plot her revenge. Positive I.D is one of those late '80's thrillers that follows in the bloody revenge foot steps of films like 1978's I Spit on Your Grave and Ms. 45 (1981). But, unlike those movies Andy Anderson's Positive I.D has been all but forgotten about. Is it worth re-discovering at all you might be asking.
The movie has a host of problems and its very clear that Andy Anderson should have brought somebody else with more writing experience to tighten up the films focus and also fill in some of the gaps in logic and plot holes. Anderson gets so close to something truly special here but plot threads are never taken far enough to be truly standout or memorable. Its frustrating because the movie very nearly gets there but Anderson fumbles on key areas in the story. To the films credit though it does have enough clever writing to keep you engaged even if aspects of the story leave one un-satisfied. The movie doesn't handle Julie's assault with kid-gloves and, treats the material with more sensitive than you`d expect from an '80's outing. It also kind of has this campy quality with some truly over-the-top moments that make is guilty-pleasure territory.
Positive I.D may never reach the heights of other late-night thrillers its still enjoyable and worth checking out.

Picture: Positive I.D is over thirty-years old and is more on the obscure side. Having said that the overall look on 1080p is good. The picture has a nice uptick in color with a nice level of clarity and detail in things like clothing, locales etc. The film does have some heavy grain and a few artifacts which I chock up to the films age and maybe the condition of original elements. Overall, a nice looking presentation.

Sound: Positive I.D has a DTS 2.0 track. Dialogue comes through nicely with no unwanted background noise. Music and sound design actually comes through in a really robust way and is mostly front heavy for those with surround sound systems.

Extras: Positive I.D has a new commentary by Author and journalist Bryan Reesman.