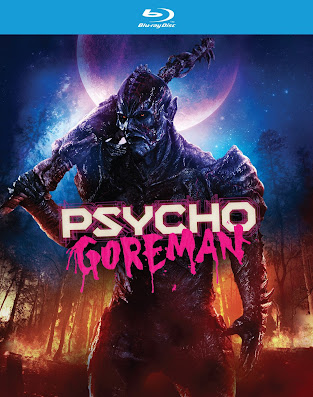 Psycho Goreman the latest film by Steven Kostanski of who rose to cult-fame with 2011's Fathers Day and further cemented himself in the genre with gems like The Void (2016) and curiously helmed the lackluster Leprechaun Returns in 2018 which I have to think was just a paycheck movie. It seems that he's gotten back to his indie horror/sci fi roots with what might be his best film to date. Two kids named Mimi (Nita-Josee-Hanna) and her brother Luke (Owen Myre) find a strange glowing gem after an intense game of Crazy ball. Turns out that this gem controls an accident evil overlord in this over-the-top splatter fest.

So, here's the thing. Psycho Goreman is one of those movies that it seems like it dominated my social media feed for a good week, owing to a no doubt effective marketing/PR team. Review headlines rang out hyperbole like, 'Greatest movie ever' etc.  I am often cautious about such over praise because often times its merely the product of over-hyped fanboy with seemingly no objectivism. I went into this film keeping expectations low and hoping that it was as fun as everyone said it was. Within the first five minutes I was laughing my ass off and by the end of the rollercoaster ride I was completely transfixed by this movies brilliance.

Steven Kostanski does an impressive job at writing gags that are not only funny but they are not the lazy punching-down variety. For me every largely every joke is perfectly set up and paid off with side-splitting. Taking this a step further some seemingly throw-away jokes actually pay off nicely narrative wise. The movie is cheesy enjoyment but Kostanski puts a lot of thought, talent and skill behind it. The end result is a neon-dipped surrealist nihilistic sci-fi superhero movie which felt like the rubber monster battles from Power Rangers but more insane and for an entire feature.

I was also really impressed by the films acting. Adam Brooks shines as the hapless dad and I've been a fan of his since his turn in the woefully-under-loved The Editor (2014) and of course Konstanski's other films. Brooks comic timing and dry delivery really makes Konstanski's jokes razor sharp. Equally good is Alexis Kara Hancey who still has her moments despite being the "straight-man" to Brooks. And, of course Matthew Ninaber deserves a lot of credit for projecting a lot of humor and menace under a Oscar worthy makeup job. As good as the adults are this movie is largely from the point-of-view of the kids and  Owen Myre and  Nita-Josee-Hanna should be locked up because they steal the movie lock-stock-and-barrel. Nita's Mimi in particular is sassy, bossy and a bit psycho and I loved every damn second she's on screen.

Psycho Goreman has a really excellent mix of CGI and good-old-fashioned practical effects by Nicole Rodriguez and Jenn Tait. Its goopy, gross and everything I ever wanted in a an old school throwback flick! Really well done. Couple this with some great photography by Andrew Appelle and music by Blitz//Berlin (The Void) and you have a special film outing. To show you I am balanced I will say the movie as good as it is does fall a little short on some of the characters (the mom has sadly underwritten) and not every scene really moves the plot forward (though they were all entertaining as hell so, I cant really complain).

Psycho Goreman is what would happen if you blended the child-like wonder of E.T, the splatter of Bad Taste and sprinkled a heaping helping of neon sci-fi insanity. A true classic!

Picture: Psycho Goreman is a very visually interesting movie and it translates very well on 1080p. The image retains a great amount of details in things like costumes, sets, locales etc. The films colors really pop and help give the film its otherworldly animated like quality. Overall this is a movie that was made for HD.

Sound: Psycho Goreman gives us a great DTS 5.1 that is bombastic and is exactly what you would want from a movie that packs this kind of punch. Dialogue comes through nicely as does the sound design and music.

Extras: Psycho Goreman truly over loads this disc with a lot of fun features! This Includes: Directors Commentary, One-on-One An Interview with the director of PG, Interviews with the Cast, Interview with Brook Adams, Kortex: A Konverstation, The Music of PG, Fight Choreography, Fight Pre-Viz, Filming the Paladin Fight, PG VS. Pandora, Miniature Magic, Inside the Creature Shop, Concept Art Gallery, Trading Cards and Behind the Scenes Gallery.