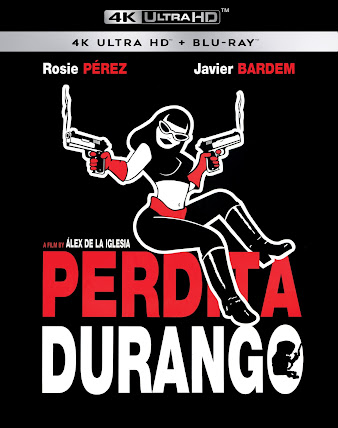 Severin Films is re-releasing Alex de la Iglesias The Day of the Beast Review HERE and, his follow up 1997's Perdita Durango AKA Dance with the Devil. Perdita Durango (Rosie Perez) is a streetwise woman who is tough as nails and fighting to survive in a harsh world. She meets Romero (Javier Bardem) a psychopathic criminal who is deeply into Santeria. For kicks the two decide to abduct two Americans Duane (Harley Cross) and Estelle (Aimee Graham) to sacrifice. The ceremony goes sideways however, kicking off a surreal insane journey. Meanwhile the police are hot on their trail.

Prior to this release I had not seen Perdita Durango but always wanted to. Thankfully it was well worth the wait to see this in UHD. This marks the directors third feature film and, you can see that in just two years after Beast the director has matured both story wise and from a technical standpoint. Alex has always had a stylistic flare but here it is pushed further with garish neon drenched scenes and top-notch use of framing and camera techniques. Its clear that the director is channeling Robert Rodriguez and Quinten Tarantino but it never feels like a carbon copy. This is because the director adds his own insane touches and grimy that coats this entire film.

Future Oscar winner Javier Bardem gives a powerhouse performance as a madman that is both totally unhinged but, surprisingly is complex and thankfully not one-note. And, as much as Bardem shines its Rosie Perez (Birds of Prey) that steals the movie lock-stock-and-barrel. Perez is thrown in with Bardem and other strong actors and she not only holds her own but commands the scenes she's in. The pair are also excellent together as well. Not only do they have tons of chemistry but the two seem to be playing off each other nicely. This movie also features a pre-Sopranos James Gandolfi and a rare cameo by the legendary Screamin' Jay Hawkins (who only did four film cameos in his career).

If you are familiar with Alex de la Iglesias you know he does not do subtle and this movie is a carnival of insanity, nasty and uncomfortable set-pieces and enough splatter to please even the most die-hard of gorehounds. And, having said that the movie involves assaults both physical and sexual and implied pedophilia and a truck full of fetuses for good measure. Iglesias loves to push buttons and, thats just what you have to expect when going into one of his insane epics. He also loves to inject social commentaries and vanity, consumerism and American tourism is all sharply and savagely satirized.

As much as I enjoy this film it does have some issues. The titular Perdita Durango who does a total 180 character wise in the final yet she doesn't feel like she has an arch that justifies it. Also, as much as I love Alex de la Iglesias dearly he tends to drag his movies out longer than they need to be and Durango could have easily used a twenty minute trim.

Take the kill-spree road tripping couple of Natural Born Killers, the bullet ballet of John Woo, the cool of Jim Jarmusch with a heaping helping of fetuses and coke and blend. What you get is 1997's Perdita Durango.

Picture: Like Day of the Beast, Severin has clearly taken a lot of time into giving Perdita Durango an incredibly slick looking transfer. Right away the colors pop but also retain Alex de la Iglesias trademark warm color palate throughout. Skin tones, costumes, sets and locales all have a nice natural look and thankfully it doesn't look over processed or needlessly messed with color wise. There is an overall level of sharp clarity that further highlights the visual flare of this movie not to mention a top-notch production design. Seriously, this movie is stunning looking especially on a budget. Grain is nowhere in site and of course the movie has been scrubbed clean or any artifacts or scratches. Excellent work and well worth the upgrade in my opinion.

Sound: Perdita Durango has a well done DTS 5.1 track. This movie has a lot going for it in terms of sound design and is more effects driven thus you really need a great track. Thankfully, just like the visuals the sound delivers a nice big robust experience.

Extras: All Extras are on the Blu Ray disc and Include: On the Border: Interview with Alex de la Iglesias (28mins)

Dancing with the Devil: Interview with Rebekah McKendry (12mins)

And rounding out the extras are trailers. As always Severin packs their releases full of great content.