Directed By: Cecil B. DeMille 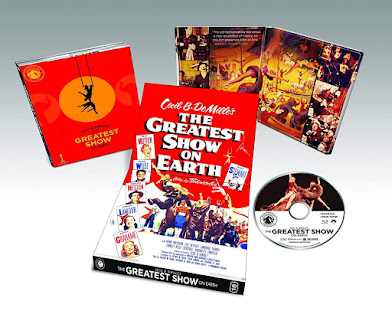 Paramount Presents #16 brings us the 1952 Best Picture The Greatest Show on Earth. Paramount is also re-releasing The Ten Commandments on UHD if you can't get enough DeMille. Take a peek inside the Big Top in this epic about the inner lives of circus performers such as Holly (Betty Hutton) who competes with The Great Sebastian (Cornel Wilde) for center ring.

Made on a 4 million (or nearly 40 million in todays money) The Greatest Show on Earth earned a staggering 36 million at the box office. Though it made a lot of money the film has gone onto earn the reputation has one the worst Best Picture winners. Greatest Show is a colorful time capsule of mid-twentieth century circuses. In this regard the movie is a fascinating and highly important document at what these performances were look over sixty-years-ago. Indeed, DeMille and his crew was given total access to some of the behind the scenes workings. As it stands today circuses have changed for the better with a greater importance on animal rights. It might seem boring but I actually found this prep work and all the hard labor that goes into setting up and tearing down to be pretty interesting. The cast is top-notch with Charlton Heston, James Stewart, Betty Hutton and Gloria Graham giving great performances.

I will say though I don't think this is the very worst Best Picture winner (Crash anyone?) Having said that I can see what people complain about. At over two-and-a-half-hour film the movie feels woefully bloated and at times repetitive. Outside of the show performances the film tells of the back-stage goings on. The bulk of the narrative threads are of the standard-overly-dramatic variety. Had this movie been trimmed by maybe forty-minutes or so I think this would be a much better, tighter film. As it stands the movie is interesting but tedious in length. The Greatest Show on Earth is certainly a movie that is very much of it's era. On the one hand I think it's a incredible document on '50s era circuses but as a film narrative its slow and not that engaging.

Picture: The Greatest Show sports a new 4k scan. This production has a very bright color palate and I couldn't think of a better film to get the 4k treatment. The film retains a lot of detail and clarity with the sets, lavish costumes and locales. I will say that the movie isn't totally free of some artifacts and scratches. There is also a few instants of some slight blurring. When looking at original trailers though you can really see the improvement and I cannot imagine this move looking better any time soon. Grain is smooth and not over processed. A stellar job.

Sound: The Greatest Show on Earth packs a huge punch sound on a DTS 2.0 track. You really get a big full sound out of this track and, like the picture offers an overall great presentation.

Extras: This release has a new feature: Filmmaker Focus with Leonard Maltin. (7mins) Produced exclusively for this release Maltin gives a lot of great background and trivia behind The Greatest Show on Earth.