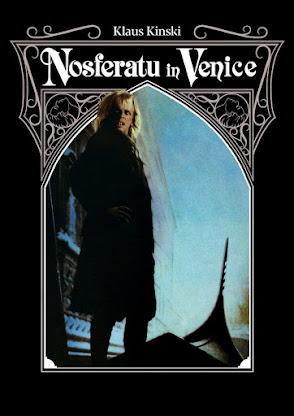 Disclaimer: Severin Films has provided me with a copy of this film free of charge for the purposes of review. All opinions contained within are my own honest reflections.
To say German actor Klaus Kinski was a difficult is probably one of the biggest understatements of all time. Stories of his temper towards his directors and actors have reached the realm of legendary. This was no expectation for the spiritual sequel to Werner Herzog's masterpiece 1979's Nosferatu The Vampire. Kinski this time around refused to don his iconic makeup (which reports say took up to four hours) or even to cut his hair. He also reportedly had the original director fired. Despite this chaos the film has gained a cult-following. Professor Catalano (Christopher Plumber) investigates the whereabouts of the undead creature known as Nosferatu.
So, let me first say that I think Herzog's Nosferatu not only does justice to the classic '22 silent film but adds depth and and horrors that sadly was not afforded to filmmakers of the era. It's a seminal classic and amongst my favorite '70s horror. I had often heard about the 'sequel' made almost a decade after the original but sadly it was a hard film to see in any legit manner. That is until the amazing folks at Severin pulled off the seemingly impossible with their HD release. After finally filling my demented eyeballs with Nosferatu in Venice I can honestly say that the wait was worth it.
Now, before I go any further I want to temper expectations. This is nowhere near the brilliant Herzog film but honestly I was not expecting it to be. The story is interesting but is a bit on the disjointed side with some elements that I felt lacked polish or a strong narrative through line. Also, I think that this movie leans mean-spirited with some pretty disturbing scenes of sexual assault committed by the titular undead character. Kinski reportedly (and as alleged in her autobiography)  actually had sex with his daughter Pola Kinski at a young age and, knowing this made these scenes all the more stomach turning.
On the bright side this movie is engaging and engrossing enough to make for an enjoyable watch. It is brimming with a surreal, fever-dream like quality and it relishes in its own absurdness. The photography is stunning and the locales and practical locals help give this film a bigger scope and overall feel. It also behooves me to mention the incredible music by Vangelis (Blade Runner, Chariots of Fire) and Lugi Ceccarelli. Even without the makeup Kinski is undeniably unsettling and creepy in the title role. What more can I say about Kinski, he was a strange guy that played equally strange characters. The supporting cast has such amazing talents like Christopher Plumber (Knives Out) and Donald Pleasence (Halloween) giving great performances. Specifically, Pleasence enjoys hamming it up while Plumber plays it like he's performing Shakespeare. While it is far from perfect I was damn entertained and, the movie is never dull.
Erotic, unnerving and overflowing with Gothic atmosphere, Nosferatu in Venice is art-house with a Pollock like splattering of blood.
Picture: Nosferatu in Venice is making its HD US debut and I am here to happily announce it looks great! The film itself has a very muted, moody color palate which is extremely well balanced here and retains a lot of detail in locales, sets and clothing. You can really tell that darkly lit scenes truly benefit from this uptick in constant.  I was also impressed how the film is never overly grainy but also doesn't look overly processed. Honestly, I think that fans that are awaiting this title will be very pleased with the end result.
Sound: Like the picture Nosferatu in Venice packs a punch with its DTS 2.0 track. Dialogue comes through nicely as does the music and sound design. I was also happy to see that there is indeed an optional Italian Audio track (w/optional English subs).
Extras: Severin always delivers when it comes to extras but fans are truly in for a treat with what they have in store for them in Nosferatu in Venice. Creation Is Violent: A New Feature Length Documentary on Kinski's Final Years (81mins). Featuring new interviews and rare behind the scenes footage and archival clips this enlightening and engrossing documentary is a must-watch for any genre fan.
Final Thoughts: Regular readers will know that I rarely ever do Final Thoughts for a single edition/Non UHD release. BUT Nosferatu in Venice is a special case. Not only am I thrilled to see this movie in a more widely available format but the label knocks it out of the park in terms of picture and sound. But what really pushes this release over the edge into epic is the 81 minute documentary that I enjoyed and I think most genre-lovers will as well. It just goes to show you how Severin goes above and beyond with their releases. If you like myself love love grimy Euro-trashy horror with arthouse pretensions, this movie will satisfy. I know it's early but this makes my shortlist for favorite Horror release of 2021.
Posted by The Video Attic at 8:30 AM