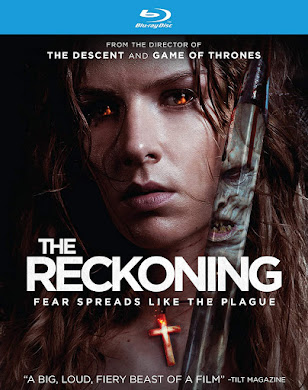 Disclaimer: RJL Entertainment has provided me with a copy of this film free of charge for the purposes of review. All opinions contained within are my own honest reflections.

Neil Marshall has had a major rise and, as of late a even bigger fall. For those of you not very familiar with Marshall`s output here is a quick recap: The director came out swinging with Dog Soldiers (2002) a modern horror classic that perfectly blended horror and action. His follow up The Descent (2005) further cemented him as a force within the horror community. After that he came out with more action centered films like the wonderfully cheesy fun Doomsday (2008) and Centurion (2010). He at this point stepped back from film and focused on television. He recently gained acclaim for his two-episode direction on Game of Thrones. Things seem to be going great for Marshall that was until Hellboy (2019) released to wide spread hate among fans. This further made fans angry that this was chosen over a third Hellboy film from the Oscar winning director Guillermo del Toro.

The Reckoning (2020) tells the story of a young newly made widow named Grace (Charlotte Kirk) during the Great Plague in London. She is accused of being a witch after not having sex with the local law enforcer. Witchfinder John Moorcraft (Sean Pertwee) is sent to get a confession out of her. From the outset I started out as a big fan of Neil Marshall's work. I even proudly own a signed Dog Soldiers blu ray. I heard the negative reviews but, I wanted to give this movie a fair shake. The movie I am sad to report is just as bland and boring as critics have said it is. Marshall is clearing trying to give us something like 2015's The Witch.  But, instead of a subtle creepy horror outing we get a woefully cliched parade of genre tropes mixed with a self-important 'message' that whilst important is shallowly delivered with no sincerity.

Meanwhile we have unintentional cheese like Grace going through Plague ridden London with perfect hair, teeth and yes, even makeup. Her costume looks like something they rented from a Ren. Faire warehouse. Kirk doing a fairly decent job given the wooden dialogue she is strapped with. Sean Pertwee who has been a longtime collaborator of Neil's (going back since Dog Soldiers and Doomsday) is probably the best thing about this film. Pertwee plays the entire thing like a grand Shakespearian production and I feel gives a performance unworthy of the material. As always I try to say something nice and, Luke Bryant's photography is stunning. His use of natural lighting and atmosphere managed to, at the very least give this film a bigger more polished look. Christopher Drake provides the movie a rich melancholic score that, like the photography lifts the film up greatly.

The Reckoning is an overly long vanity project that has an important female empowerment message delivered in the worst kind of lip service way. It never tries to have a real conversation about such timely topics. Rather Marshall throws mindless nastiness and eye rolling predictable horror trappings to distract you from its hollowness. I remain a Neil Marshall fan and hope he can get back to his indie roots.

Picture: As I said in my review, the one thing I liked about this movie was the atmosphere and stunning photography. This is translated really well on 1080p. Even the darker scenes still maintain a nice sharpness and clarity overall.

Sound: Like the visuals this movie has a great score and sound design. Here we get a nicely done DTS 5.1 track. Dialogue comes through nicely and the effects and design come through in a big way.