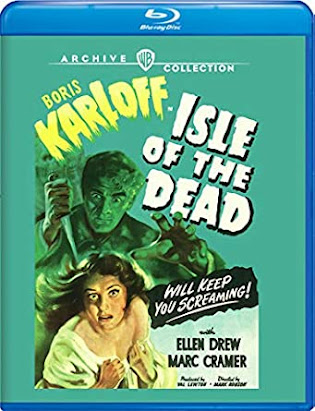 I've been a big fan of producer Val Lewton's films ever since Warner Brothers released The Val Lewton Collection in 2005.  Isle of the Dead is, in my humble opinion one of producer Val Lewton's most sorely underrated film and, sadly, it always seems to be left out of the conversation of truly great '40s era horror. It stands right up there alongside Cat People (1942) in terms of quality and haunting atmosphere. Set during the First Balkan War Isle of the Dead introduces us to a General named Nikolaos Pherides also known as 'The Watchdog'. Gen Pherides has a reputation for being at heart a good person but has a strong sense of duty and an extreme sense of discipline. When the General and a reporter goes to a small island to visit his wife's grave they stay at a small inn for the night. This will prove a fatal mistake as during the evening one of the Inn guests falls dead of the plague. Now madness and sickness unfold in this tense thriller.

Few '40s era horror movies for me hold up as well as Isle of the Dead and this is a truly chilling film despite a rather cheesy looking cover art. Like a lot of Lewton films Isle is steeped in what I call Gothic-Noir which is a moody Gothic style with overtures of German-Expressionistic lighting. For Robson and Lewton the true horror in Isle of the Dead comes from a near-fever pitch level of religious terror and paranoia. Things go from bad to worse when the level headed General starts losing his grip on reality. The characters are complex and the movie never veers off into camp. And, unlike other horror of the '30s and '40s, there is no clumsy comic-relief to break up the horror. For eighty minutes Robson and Lewton grip you icy terror and never lets up.

Jack MacKenzie who by the time he died had over two-hundred credits to his name does an amazing job at bringing out the films claustrophobic and paranoiac qualities. He does this brilliant thing where he will linger on empty dark spaces whilst Robson builds tension leaving the audience to painfully wait until something will emerges. There is a scene towards the end of the movie that still makes me jump even after multiple viewings. (Obviously keeping it vague).

At just a scant seventy minutes Mark Robson and producer Val Lewton crafts a chilling isolated horror film that feels eerily relevant in to today's climate. A Masterpiece of Horror!

Picture: Seeing one of my favorite films, especially one that is so visually provoctative truly makes my heart sing. As a lover of film it was so satisfying to see  Isle of the Dead get a 4k overhaul. Virtually all artifacts and scratches have been removed and the end result is a transfer befitting this film. The black-and-white contrast is well balanced with deep blacks and the overall image retaining a great deal of clarity and detail.

Sound: Like visuals Isle of the Dead features a top-notch soundtrack. The films dialogue and sound design comes through nicely and there is no unwanted background noise or hiss that I could detect.

Extras: Isle of the Dead is given the A-Treatment here. We get a Brand-New commentary by Steve Haberman. This engaging and well researched track will sure to please any fan and should be considered a must listen! Keep in mind this is not on the OOP DVD release.