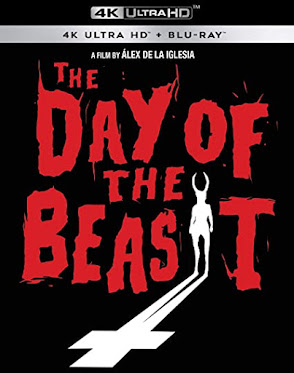 Severin Films has gotten into the UHD game and they are coming out swinging with Alex de la Iglesias's The Day of The Beast (1995). This movie brings back a lot of memories of my VHS renting days. Believe it or not I first saw TDOTB from renting it from a grocery store, I probably was a freshman in HS at the time. The film follows a priest named Cura (Alex Angulo) who must do whatever he can to stop the Anti-Christ from being born on Earth. Aiding him is a television personality named Cavan (Armando De Razza) and a heavy-metal warrior named Jose Maria (Santiago Segura).

Even when I first saw it as a teenager, I could tell that this movie was something special and very different from my typical viewing. What struck me back then and now is how writer/director Alex de la Iglesias slyly injects Beast with a heaping helping of pitch-black comedy. The film always skirts the line of being mean-spirited but I feel like it never actually is. This is because Alex always throws something totally absurd our way. Frank Henenlotter is another filmmaker that always keeps things grimy but fun. This is a refreshing balancing act that may seem easy enough but its really tricky to do well.

The Day of The Beast has an exciting balls-the-bloody-wall energy that is constantly engaging and makes for a drug fueled joy-ride. Like in his other works in Beast Alex de la Iglesias celebrates the 'others' the misfits of society and makes superheroes out of them. This is explored in a lot of his work, especially Mutant Action (1993) his first feature film. Here we get the long-haired heavy-set heavy metal hero that we all deserve in our lives in Jose Maria played to the hilt by Santiago Segura (more on the actors in abit).

Even as someone who adores this movie I can admit it has some flaws. Alex de la Iglesias seems to throw everything and the puke-stained sink and I chalk this up to being a at the time new filmmaker and not wanting to lose any footage. The end result is a movie can be a bit on the bloated side and I think maybe 15 minutes or so could have been trimmed for pacing sake. The movie also suffers from some plot conveniences and some pesky plot holes.

But, you know what? The movie is enjoyable enough that plot-holes be damned (actually damned in fact). The acting is great with Alex Angulo, Armando De Razza and Santiago Segura giving their all and seemingly having a blast all the while. Terele Pavez a Alex de la Iglesias regular is also stellar- everybody in this movie is. Whacky randomness like a super casual naked grandpa and LDS blood mixed sacraments are just a few of the wicked delights awaiting you!

The Day of The Beast is a rock-fueled absurd-outing & the best damned Satanic Christmas movie ever! A must-see!

UHD Picture: Severin has knocked this UHD presentation out of the park here. The overall film has a nice uptick in color and clarity. The color has a really sharp vivid look and thankfully things don't look overly processed leaving things with a nice natural hue to them. There is a lot in the way of details in costumes, sets and locales. Grain is present but consistent throughout and never overly heavy. Some of the end scenes look a little awkward due to the special effects but its nothing that in my opinion detracts from the overall product.

Sound: I am happy to say that, like the film picture presentation the sound here is top-notch. Here we get a DTS 5.1 track that in my opinion offers a punch to the sound system with a nice complex range. Keep in mind this movie has a lot going for it in the way of the soundtrack, sound effects/design so you really want a sound presentation that lifts those elements up. And, thankfully it does here! Severin also includes a Spanish track as well as a Master 2.0.

Extras: I smell something... What is that? Could it be the smell of a Rondo award for Severin? Because honestly Heir to the Beast (1hr 20mins) seriously has my vote for best special feature/documentary. Featuring rare behind-the scenes footage and a lot of great interviews which of course talk about the making of Beast but also explores the state of Spanish cinema prior to the films birth. The wealth of information and engaging interviewee's is fantastic. Severin should be incredibly proud of this film document.

Also included is a series of interviews:

Beauty and the Beast Interview with Maria Grazi Cuciontta (17mins)

Final Thoughts: I had high hopes for The Day of The Beast on UHD. Not only is it a movie that was a big part of my early international film education but, just a favorite in general. The fact that Severin has enough faith and respect to give this a UHD release is amazing and, its safe to say the final product does not disappoint. Fans of this film can rest assured that this movie looks and sounds amazing. Taking this a set further is is over two-hours of brand-new features! The documentary Heir to the Beast takes this release to a entirely different level as its an eighty-minute deep-dive into the film that is engaging and well worth fans time. This is true love for the material and Severin never half-asses anything they do. I think we as fans tend to take for granted things like amazing extras, not really thinking about the time, energy resources and planning that goes into them. If you already love The Day of The Beast you NEED to own this movie ASAP. If you are new to Alex's films this is the perfect time to watch them. Hell, I saw this on a crappy VHS and fell madly in love. Cheers, Severin and keep the Alex de la Iglesias movies coming!