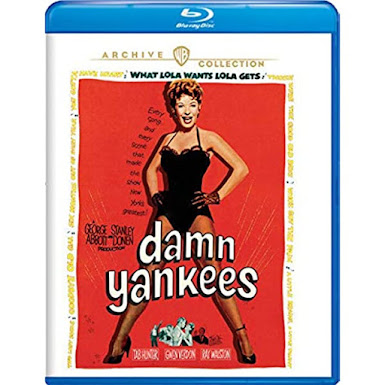 Disclaimer: Warner Archive  has provided me with a copy of this film free of charge for the purposes of review. All opinions contained within are my own honest reflections.
Baseball and big Broadway musicals are as American as you can get. But, you wouldn't think that the two things worlds would mesh together well. However, this long running musical and hit film proved that sports jocks and theater geeks can make some beautiful music. A older diehard Washington Senators out of frustration unwillingly makes a pact with the devil AKA Mr. Applegate (Ray Watson). Now, the elderly fan is transformed into a young amazing player named Joe Hardy (Tab Hunter) with the goal to help the team win the pennant. Applegate also sends a temptation his way in the form of Lola (Gwen Verdon).
So, I confess that I am not the biggest sports fan (shocker I know) and I've been trying to push myself to explore more musicals. Damn Yankees wastes little time in jumping right into the heart of the narrative and its upbeat tempo made the nearly two-hour film fly by. And, like any great musical it hooks you with instantly likeable and engaging characters. But, the real lynchpin is the music itself which is well done and memorable. Whatever Lola Wants is certainly the most iconic and, in my opinion the best song brought to life by Gwen Verdon.
A lot of people have pointed out that the musical numbers are very stage bound and photographed like a flat stage play. While this is true I never felt that it detracts from the overall product. The cast is fantastic with Tab Hunter giving a career high as Joe Hardy. Ray Watson steals every scene he's in as the very devil, Mr. Applegate. Watson is delivers evil but also has a great deal of charisma and the right amount of camp. Gwen Verdon of the famous Verdon/Fosse (Bob Fosse is featured in an uncredited dancer) of course shines as Lola.
Damn Yankees features great musical numbers and a magnetic cast which helps translate this hit musical to the silver screen. Very few musicals have the kind of natural ease and smoothness as this one does.

Picture: Warner Archive knocks their transfer of Damn Yankees outta the park! Filmed in Technicolor this movie absolutely pops with color. Watching on my 4k television not only does the colors really bring the movie to life, its staggering how well balanced the palate and tones are. The transfer not only has a lot of depth in the image but retains a lot of fine detail in clothing, locales, and sets. Yankees is over sixty-years old and, in my opinion will probably never looked better. If you are a fan of this film and are on the fence about upgrading, its worth it.

Sound: Damn Yankees has a nice strong DTS 2.0 track. Being a musical its important to have a great soundtrack. Thankfully, WA provides fans with a big robust sound experience. Musical numbers come through with a lot of great clarity as does dialogue and sound design. You really cannot ask for better.

Extras: Extras include the US Theatrical trailer and the UK version.