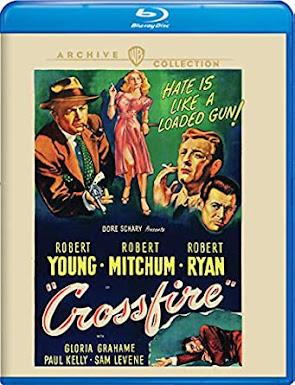 Crossfire starts literally with a bang, as we the audience are thrown right into a fist-fight  already in progress. We later find out this turns into a savage murder. A Jewish man is found dead in a hotel room, the reasons for the murder is unclear. Detectives narrow the suspects to a group of soldiers, but who was it and why? In terms of hard-hitting film-noirs Crossfire is as groundbreaking as you can get. Just coming two-years after the end of WWII the movie deals with incredibly timely and heavy subject matter. Namely, the hatred of Jewish people. The original book in which this is based (by author Richard Brooks) is actually is about a homosexual soldier being the target not a Jewish man. But, this of course would never have flown with the censors, especially in '47. I couldn't help but think about this when the poor victim was lured into the mans hotel room.

Director Edward Dmytryk (Mirage) would get his one and only Oscar nomination for his stellar work on this Noir which is an ever unwinding, icy crime-drama. The movie is hard-hitting and never puts kid-gloves on its subject matter yet, I think Dmytryk and screenwriter John Paxton (Murder, My Sweet) add a glimmer of hope at the end. This helps keep the movie from becoming too bleak, especially since people were at this time still learning about the full horrors of Hitler's Final Solution and the kind of unbelievable horrors that were playing out in real life.

Cinematographer J.Roy Hunt (who had two-hundred credits to his name gives the film) is among the photographers who would help shape the look and tone of film-noir with its use of German-Expressionist. Here the film is bathed in dark shadows and moody-key-lighting that gives it that brooding atmosphere we have all come to expect from noir. In front of the camera is a stellar cast that includes tough-guys Robert Ryan, Robert Mitchum and Robert Young. Gloria Graham earned her first Oscar nomination for the sultry Ginny. Though she did not win the Oscar for Crossfire she did nab the gold-statute for 1952's The Bad and the Beautiful. Graham truly is stunning in this movie, not only in looks but her effortless talent. The movie is further topped off with a memorable score by Roy Webb (Notorious, Out of the Past).

Crossfire is a film that I was shocked even got made, seeing how it tackled a subject like anti-Semitism not very long after WWII. But, it's a film that needed to have a conversation about hate and othering. This preachy message though is bitterly ironic as the Hays Code would not allow the subject of homosexuality or god forbid any understanding or sympathy towards them. Still, as it stands this is a very important film and one that needs to be discussed more.

Crossfire is a pulpy, engaging murder-mystery with a message that is timely.

Picture: Film Noir is always in great hands with Warner Archive. Here we are a dazzling new 4k scan that truly does this movie justice. The film is pristine in its restoration having no scratches, artifacts in sight. Crossfire retains a great deal of detail in every aspect of the production from the clothing, set design and locales. You never get an over processed look from WA and the contrast of the black-and-white photography is balanced correctly and always looks sharp.

Sound: Crossfire features a very well done DTS 2.0 track. Dialogue comes through nicely and any unwanted hiss or background noise is not present.

Extras: Extras for Crossfire include the TCM produced Crossfire: Hate is Like a Gun (8mins) featurette and a feature length commentary by Alan Silver and James Ursini