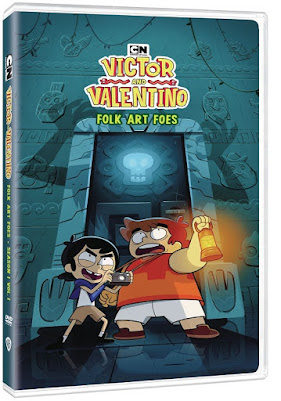 I have to say that I've been out of the somewhat out of the loop when it comes to modern Cartoon Network offerings. Now, allow me to put on my big white beard and say, I was a fan of the wealth of cartoons from CN around the time that the channel launched its most iconic shows such as, Dexter's Laboratory, Cow and Chicken, Johnny Bravo etc. Along with the orange splattered Nickelodeon, Cartoon Network was my gateway into animation both modern and older. After all, Cartoon Network use to do big blocks of classic animation before that was phased out for its original content. I grew up and away from Cartoon Network which paved the way for more adult-centric offers and also the amazing stuff Pixar keeps putting out. I did come back to Cartoon Network with the trippy fun and utterly brilliant Adventure Time, not to mention the bold stuff that Adult Swim (CN after dark) has been churning out.
With recently getting the Season One of Victor and Valentino it was fun to dive into something completely new. It was also nice that each episode is only 11 minutes which makes binge watching a breeze. The show centers around brothers Victor (Diego Molano) and Valentino (Sean-Ryan Peterson) as they encounter various Latin American myths and legends whilst spending the summer with their Grandmother Chata (Laura Patalano). So, some people have been saying that this show is kind of a re-tread of shows like Gravity Falls and to a degree Adventure Time but I have to say I think this show may have similar styles as the above mentioned but it is by no means ripping it off. What I really enjoy about the show not only is it a magic filled almost anything goes ride but it teaches kids  and adults alike about Latin American culture and folklore. It puts the focus and point-of-view on different cultures and perspectives and I'm all for that. This set includes episodes 1-18.
Picture: Though being on 780p V&V has a bright palate that retains a sharp clarity and a lot of detail. I think that animation on Standard Def while of course not perfect still gets the job done in terms of a solid presentation. If you think that you may not want this being on a lower-def format I honestly think its a very pleasing overall transfer.
Sound: While not totally remarkable, the sound presentation is also really solid 2.0 track. Front heavy channel but it packs a mean-punch in my opinion.
Extras: None
Posted by The Video Attic at 10:20 AM