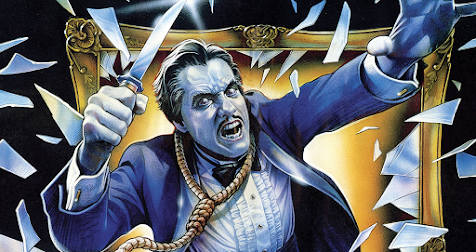 Please Note: Since this isn't an official home-video review so I won't be doing a deep dive into the transfer, sound or extras. Just wanted to highlight this obscure '80's horror outing, enjoy!

Twice Dead from 1988 was a VHS oddity that sadly my mom and pop rental store did not have. Though in recent years I had read about it. Thankfully the good folks a Scream Factory have put out a limited batch on HD for horror fans to devour. Luckily I ordered a copy before they sold out-which they did in almost record time. Twice Dead sees a family moving into a large '20's era mansion that they had inherited. Their luck seems to be running out as the neighbor has a roving gang of psychos and the house is haunted by a former stage actor. Twice Dead has the trappings of a fun late '80s video bin outing yet, sadly its a mixed bag at best.

Twice Dead starts with a brisk first act that in a very short amount of time sets up the films backstory with a quick flashback and the flashforward to the Cates family moving into the house. Everything has this wonderfully '80s charm further helped by decade mainstays Jill Whitlow and Todd Bridges. It also has this air of mystery that kept me engaged. As much as the first act is strong, sadly things only go down from there. My biggest issue was that Dragin has some interesting concepts but never settles on what he wants this movie to be. Is it a supernatural outing or a movie about street thugs? It's not that you can't have both and indeed he tries to blend to two together plots together and it honestly never seems like it meshes well. The movie is also wildly unfocused and it feels like the movie is missing big chunks of plot and the end result is a confused and lackluster outing.

The director does have a few clever twists up his sleeve but I could tell that this script needed a major over-haul as its saddled with plot holes and head-scratchers. I will say that Twice Dead does have a lot of retro-charm and despite its meh narrative there were a couple cool set-pieces.