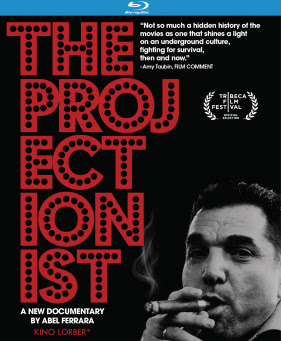 Disclaimer: Kino Lorber has provided me with a copy of this film free of charge for the purposes of review. All opinions contained within are my own honest reflections.
Cult New York filmmaker Abel Ferrara's latest film The Projectionist documents the life and career of Greece born Nicolas Nicolaou who owned and operated his own chain of theaters. Ferrara crafts an interesting rags-to-riches story of a movie lover that fought his way through the system and survived the rise of the family-friendly 42nd Street. I love cinema, I love the history of cinemas of NY and of course I have been a huge fan of Ferrara's grimy street ridden films since my mid-teens. This for me had the making of a top-notch documentary but, sadly, the film is wildly uneven, even a bit on the sloppy side.
First I want to talk about what I think was interesting about this film. Anytime you have a underdog that is an automatic win as, unless you were born into wealth, you can relate to having to fight for what you want in life. Nicolas was a scrappy theater manager that worked hard, sacrificed and turned that work into millions of dollars and, more importantly it fueled his passion for cinema. It also veers into a kind of David and Goliath story as he fought to keep some of his theaters alive and well. I personally found the history of the adult theaters very interesting.
But, here in lies the problem. While Nicholas's story is indeed an exciting and interesting one it struggles to take up the films already scant eighty-minute runtime. I wished that NY cinema history could have played a bigger part of the documentary which I think would have not only filled out the runtime but also added weight and context to Nicholas's rise. As I said, they touch briefly on things like Major Rudy Giuliani cleaning up 42nd street and targeting adult theaters, many of which Nicholas owned at the time. The movie after an hour seems to run out of steam and Abel and Nicholas interview cinema-goers and its painfully awkward. Also, I couldn't help but be super jealous that I never ran into Abel Ferrara whilst I would visit NY in the summer (in the olden times).
Maybe worst of all on a technical level the movie is sloppy. For example, some of the background music actually makes it difficult to understand the films subject. The scarce voice-over narration sounds strange barring to how and/or where it was recorded. There is an overall lack of polish, especially from someone that can clearly make incredibly works of art like Abel. The Projectionist is a compelling story but is lackluster on a filmmaking level and runs out of steam from a narrative one.
Picture: The Projectionist being shot on what is no doubt a newer digital medium and therefore looks great being transferred over to 1080p. Projectionist is part travel log and the outdoor locales of Greece are stunning in HD.
Sound: The Projectionist has a solid DTS 2.0 track. Dialogue comes through nicely as does the music.
Extras: The Projectionist has Matt Barry's The Cinevangelist: A Life in Revival Film (2018) which I actually reviewed previously. Click HERE to check that out.  Its a great addition and companion piece to this film. Rounding out the features is a series of Trailers.
Posted by The Video Attic at 9:35 AM