A Scream in the Streets (1973) Severin Films Blu Ray Review 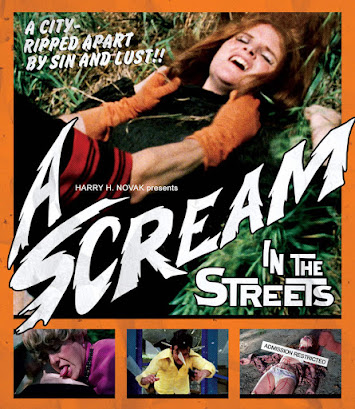 Disclaimer: Severin Films has provided me with a copy of this film free of charge for the purposes of review. All opinions contained within are my own honest reflections.
A Scream in the Streets wastes zero time in cheesy '70s cop-action. This movie produced by sleaze-master Harry Novak. So this movie is what is known as roughies. According to the Grindhouse Database (Link HERE) Roughies were a more aggressively lurid subgenre of classic Sexploitation cinema. These films injected violence and sadism into the standard, rather innocent, softcore mix. They featured stories dealing with S&M, kidnappings and sexual abuse. It was pretty sick stuff and perfect for the adult Grindhouse theatergoers who craved more seedy, exciting thrills. These movies tried to push-buttons whilst also adding a sex-element. Scream in the Streets is a roughie for the cop-action set and includes a lot of softcore sex.
The 'plot' (saying this movie has a plot is being very generous) about a serial rapist is not even secondary to the film and, indeed I argue Scream in the Streets wasn't made for multiple watches but rather to be viewed via a scratchy porno-loop projected in some creepy uncles basement.  I will be the first to admit that films in the roughie genre are really not my bag. (Though I love Sinful Dwarf)  I don't find the sex and nudity appealing because I'm gay and the torture of women also does nothing for me. I'm not shaming anybody into these films which reflects a time when certain fetishes like whipping and S&M couldn't be accessed online. To me they are kind of of a bygone era and one that is hard for me to connect with. It doesn't mean these movies have no merit and, hey if you dig them more power to you. I`d even say this movie is mildly transphobic but that would imply taking this movie seriously which you really cannot.
If you ever wanted to see a police show made by demented perverts A Scream in the Streets is the film for you!
Picture: Severin really did a good job at cleaning up A Scream in the Streets which no doubt was in rough shape. This new 2k scan is a really vivid and the uptick in color and clarity is pretty evident and if you are a roughie completist you will be pleased. We also get the option to view the film in the 1:85:1 or the open matted 1:33:1.
The movie still has a nice Grindhouse look with scratches and artifacts. This actually enhances the movies back alley sleaze-quality and for that I tip my hat to Severin.
Sound: The sound for A Scream in the Streets is also really well done with a nice DTS 2.0 track. The dialogue and sound design comes through nicely and I am happy to report that
Extras: A Scream in the Streets has two shorts: The Pepper pt 1 (10mins) and Pepper p2  (9mins)
As well as three trailers. The trailers are a nice feature and as someone who loves Grindhouse trailers this was a nice addition! The second trailer includes the alternate title card Girls in the Streets
Posted by The Video Attic at 8:31 AM