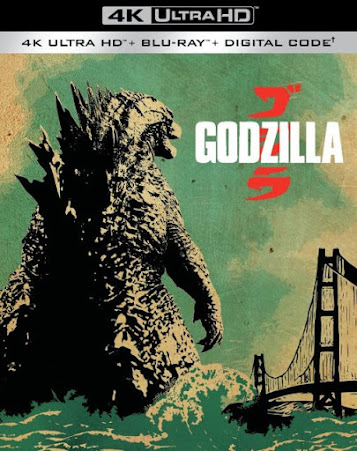 Later this year Godzilla will finally be fighting King Kong in a epic-smack down fans have been waiting to see. But, until that time Warner Bros. has re-released 2014's Godzilla on UHD. The atomic monster Godzilla is awoken and wrecks havoc as the military try and scientists try to stop him.
2014's Godzilla had a lot riding on its lizard back. It not only had to serve as a key piece to WB's Monsterverse but it also had to erase the stink of the '90's Godzilla. Not to mention make back its beefy budget, please fans and set up other sequels and crossovers. The movie made 500 million over double its budget and received mixed to positive reviews. I think that Godzilla has always been a tricky IP for Western filmmakers, especially big budget studios to pull off. They never seem to get to balance of humans/monster right and, I think that the biggest complaint with this film was the titular Godzilla gets very little screen time. Furthermore, the human characters are a bit bland and and this movie under-uses Bryan Cranston who gives the movie the emotional weight in the first half of the film.
And, while you cannot blame the movie for not wanting to inject any camp for fear of being compared to the '98 version (which for the most part also took the material very seriously) this movie for me is missing the dumb-fun/serious balance. I will say I did like bringing the nuclear origins of Godzilla and the bomb in '45 back to the mythos. Also, when we do see the big-badass monster you cannot help but be in total awe.
Godzilla is a big scale film that goes back to its atomic roots but sadly drags with basic characters and stock disaster movie fodder.
Picture: I want to start off by saying that 2014's Godzilla has a dark color palate. This was never meant to be a big dazzling colorful outing. This has lead to some scenes in the old HD version to be overly dark almost to the point of making it hard to see what was going on in certain scenes. The UHD is certainly an improvement lending to a slight uptick in color and clarity. Images overall have a nice sharp look and retains a lot of details in costumes, sets and locales. While its not a mind blowing difference I will say that this new edition is worth the upgrade if you only have the HD edition especially with darker lit scenes.
Sound: Godzilla's DTS 7.1 soundtrack roars with a lot power that you would want and expect from a movie of this scale. It goes without saying that this sound experience offers a huge complex sound and is an improvement on the HD version.
Extras: All the extras are on the Blu Ray and includes
Monarch: Declassified (three in-universe shorts pretraining to Monarch)
Behind the Scenes featurettes:
Godzilla: Force of Nature (19mins)
A Whole New Level of Destruction (8mins)
Into the Void: The H.A.L.O Jump (5mins)
Ancient Enemy: The M.U.T.Os (6mins)
Posted by The Video Attic at 11:05 AM