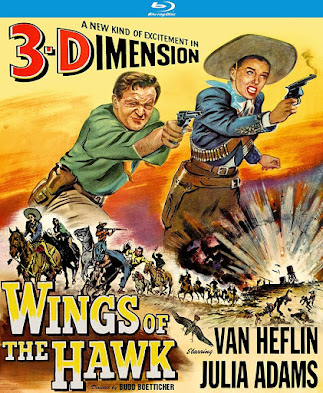 Wing of the Hawk IN 3D screamed the advertisements. Hawk came at time when the gimmick of providing an audience with a new experience would help failing box-office returns. It also was an attempt to compete with television which was thought to be the death nail for cinema (kind of like streaming is seen today).  Set during the Mexican revolution of 1910, a rough yet charming American prospector named Irish Gallager (Van Heflin) finds himself in the middle of the revolution after his gold mine is stolen from him.

Though he never became a household name writer and director Budd Boetticher is best remembered for his action and western outings. Wings of the Hawk is an ambitious film on what seems like a fairly big budget. I love how the movie is set during the Mexican revolution which I think helps give the movie a little more complexity than just a run-of-the-mill action adventure set/western. For the most part I think this aspect of the movie is handled as well as you could expect from a Hollywoodized standpoint. The story itself moves at a nice brisk pace with some really nicely directed action sequences. Thankfully, Boetticher keeps the film lean and it never feels like he injects any filler material.

Despite winning an Oscar in '41 for Supporting Actor in the film Johnny Eager, Van Heflin never really achieved the kind of stardom as say James Stewart or Cary Grant. While he is not going to win any awards for Hawk, he is really stellar as a gruff-tough but charming leading man. Opposite Helfin in Julie Adams. I have to say that actor Julie Adams was a big selling point for me for this specific title. She is of course best remembered for her iconic role in The Creature from the Black Lagoon (1954), which, famously would also be featured in 3D. I had the pleasure of meeting Ms. Adams at two different conventions and, she was so delightful to her nerdy fans myself included. She is great in the role and, her and Heflin play off of one another nicely.

Is Wings of the Hawk is some under-loved gem? No. But the movie was enjoyable enough that I would easily want to watch it again. It isn't deep and some of the Mexican stereotypes are on the cringe-worthy side, yet, I still thought the story well developed, the acting solid and enough action to keep things flowing nicely.

Picture: Wings of the Hawk is over sixty-years old and was originally filmed in 3D which as I said in my intro was a gimmick to lure people away from their television sets and into theaters. The film boosts a 2k scan of both the right and left Interpositives. Now, I am far from an expert on 3D cinema and the pitfalls of restoring those to HD. I mention this because Wings has a nice clarity but the image lacks a lot of depth and is somewhat muted color wise. I say only somewhat because the image has a pop of color throughout. Grain is on the heavy side as well. I chock these minor issues up to the process of restoring a movie in this format (again not an expert on 3D restoration). On a high note the movie clearly never looked better and you can plainly see that the uptick in color and sharpness glosses over the minor issues I mentioned above. Kino is always an amazing label and, I know they always provide the best possible print, so I believe this is a good as it gets for this title.

Sound: Wings of the Hawk has an overall nice sound track with a DTS 2.0 track. I noticed some minor issues with the audio-balance but, this was very minor. Overall, the track is nice with dialogue that comes through well as does the effects. This is a front heavy sound experience.