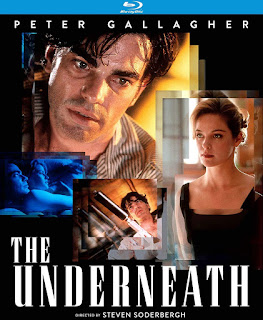 I assume everybody is at least somewhat familiar with Steven Soderbergh but, a quick recap. Sex, Lies and Videotape (1989) was the feature film debut of the director and helped launch his career. He has gone onto win an Oscar and direct such films as Traffic (2000) and Erin Brockovich (2000). The Underneath marks the directors fourth film. Michael Chambers (Peter Gallagher) returns home for his mother's wedding. What should be a happy homecoming spirals into lies, murder and betrayal in this mid-'90's thriller. It's pretty clear that Steven Soderbergh is channeling the great Alfred Hitchcock in  the film's use of colors, style and camera work, not to mention themes. But, thankfully this is not just a Hitchcock clone and the movie has youthful ambitious with some great twists in the ever unfolding plot. The entire thing has this erratic feeling that keeps you off-balanced. Pushing this further is the visual style which pays homage to earlier Noir but also the neon-soaked masters like Argento and Bava. DP Elliot Davis (Out of Sight) helps further give the film this oddball flourish.
For the most part the acting is really good with  Peter Gallagher giving a great early screen performance. Gallagher has this charm that further makes it easy to get on his side. This would also be an early film for William Fichtner who seems to be having a good time devouring the scenery. This also includes the likes of Paul Dooley, Elisabeth Shue, Anjanette Comer, Shelley Duval and Joe Don Baker. You really couldn't ask for a better supporting cast. While I think this is overall a good film I can't help but feel that some of the characters are underwritten. Indeed, some plot points are weak and could have used expanding. The Underneath is just a few of the films that arrived at a time when talented young filmmakers and screenwriters were ushering in a new wave of cinema.
A under-loved, provoctative Neo-noir thriller that further proves Soderbergh status as heavy-hitter.
Picture: The Underneath was made in '95 which makes it nearly thirty-years old. And, the film look's really good. Grain levels are present being shot on film and is overall well maintained. As I said in my review the visual styles are well executed and this transfer really celebrates it. The image has a nice crisp and vivid. Things like locales, sets and clothing really pop in my opinion.
Sound: Underneath has a well done DTS 2.0 track. Dialogue comes through nicely with no issues. This isn't an effects heavy film so I think a more subdued track actually works in the films favor.
Extras: Underneath has a feature length commentary from Film historian and critic Peter Tonguette. An overall really engaging and informative track that is extremely well informed.
Posted by The Video Attic at 8:13 AM