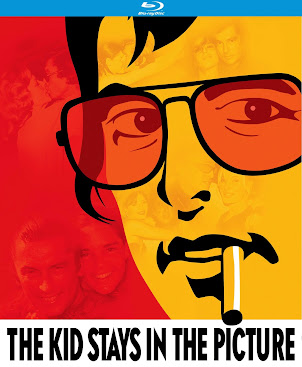 It sounds cheesy but The Kid Stays in the Picture from 2002 holds a special place in my heart. It was an early indie movie I watched in the theater. I was seventeen when this movie came out and was screened at my nearest local indie theater which was an hour away. At that time I was really exploring movies outside of Hollywood, which included foreign films and, in this case documentaries. Anyways, enough skipping on memory lane.
The film tells the rise, fall and rise-again of powerhouse Paramount producer Robert Evans as narrated by the subject himself. In terms of impact, Paramount was a undeniable force of seventies cinema. Groundbreaking films like The Godfather (1972), Harold and Maude (1971) and The Conversation (1974) shaped counter-culture film and would inspire and shape the artform for decades to come. None of these films would have come to be without Robert Evans.

Directors Nanette Burstein and Brett Morgen who, previously both were nominated for Oscars for their documentary On the Ropes (1999) really help us the audience to not only root for Evans but become incredibly transfixed by his story. However, the thing that is most captivating and frustrating thing is: Robert Evans is the sole teller of the story. For the good. Evans is no doubt a masterful storyteller and clearly his charm just carries the viewer away. Outside of the wonderful visuals (rare photos, well placed film clips etc) and archival interviews with Evans, it's the way the legendary producer weaves his story is simply spellbinding.

The bad side of this is we are getting only one point of view, which allows for no objectiveness. It's sad because I would have loved to see new interviews from the many people Evans had worked with throughout his career. For example, I would have been really interesting to hear from Coppola, as the pair had a pretty famous falling out. It's hard to tell how much of the stories Evans tells is maybe a bit stretched for sake of a good story and, without anybody backing these accounts up you cant really be sure.

As it stands its a fantastic documentary and, it's great to see that both documentary directors Nanette Burstein and Brett Morgen are still actively working in this medium today. If you`ve never heard of this movie, or, have been putting it off, I highly recommend it.

Picture: The Kid Stays in the Picture is mainly a series of clips and archival material but, also weaves some footage shot specifically for this movie, mostly of inside Evan's famous Hollywood home. Shot in 35mm and not digital this new transfer looks great indeed, with a uptick in color and overall clarity.

Sound: The Kid Stays in the Picture has a DTS 2.0 track. Evan's narration comes through extremely well as does the film's sound design and music.

Extras: The Kid Stays in the Picture has a nice array of bonus features. The highlight is the feature length commentary by filmmakers Nanette Burstein and Brett Morgen. We also get five full length short films/appearances by Evans that is featured in a shorter format in the documentary. This is a nice supplement to include.