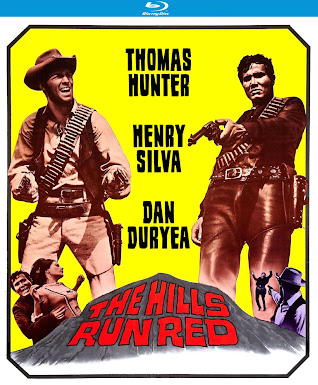 At the end of the war two Confederate soldiers steal Union money. One man named Horner (Geoffrey Copleston)  escapes with the loot leaving the other, Jerry (Thomas Hunter) to rot in prison for five years. To make matters worse Jerry's wife is killed and son is adopted by his enemy, Horner. Now, he's on a path of revenge.  The Hills Run Red (1967) rode the wave of Italian westerns in the wake of Sergio Leone's seminal A Fistful of Dollars in 1964. In fact, in terms of great Italian westerns Sergio Leone is oft considered the gold standard. Though, that doesn't mean that there arent some really well made or entertaining entries outside of that directors filmography.

Hills is clearly operating on a paper thin plot which feels like it could have comfortably fit a short format like television rather than a feature film. The director, Carolo Lizzani tries to pad the plot out with sub-plots like Jerry's son Tim (Loris Loddi), or another sub-plot about helping the towns-people take back control of Horner and his men. This would be all well and good had these sub-plots felt organic to the narrative and not simply tacked on. This is where you can really start to see the cracks in the screenplay. Wisely, Lizzani tries to add some emotional stakes ala the dead wife and estranged son but, I never really felt that these elements were used in a effective way. On a brighter note, I will say that the film features some great action-set-pieces (although, it's nothing that you haven't seen a hundred times) and showcases a score by the legendary Ennio Morricone (credited as Leo Nicholas).

With all his charm and good looks Thomas Hunter manages to be a pretty awesome leading man. Thankfully he doesn't try to do a riff on Eastwood but makes it his own. Henry Silvia plays the heavy and,  is always a win in my book. The character actor seems to be enjoying hamming it up. Easily my favorite and most likable character is Col. Getz played by Dan Duryea. Duryea is best remembered for his '40's era Noir's like Too Late for Tears (1949) adds a lot of charm to his outing. It's just a shame that his role wasn't bigger.

The Hills Run Red is a bit frustrating as it has all the pieces for a enjoyable Italian western but it's 'saddled' with an underwritten plot and characters. Having said that, I will give the filmmakers credit that, though it may be lacking in narrative richness its never dull and features some great action and an overall decent pace. A worthwhile but kind of forgettable entry.

Picture: Kino never ceases to surprise me when it comes to their fantastic transfers. Though it doesn't say, I wager that this is a 2k scan utilized with some really good original film elements. Grain is kept to a minimum and is consistent throughout. Furthermore, the color balance and grading is well maintained as well. Visually the outdoor landscapes are rich in detail, as are locales, sets and clothing.

Sound: Hills has a nice DTS 2.0 track. Dialogue comes through nicely as does the sound effects and design. No background hiss or drop-out issues are present.

Extras: The Hills Run Red has a commentary by Alex Cox.