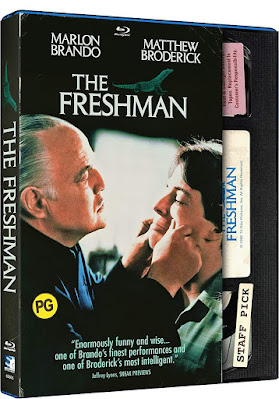 For those of you that arent familiar, Marlon Brando was a Hollywood icon with his breakout role coming in 1951's A Streetcar Named Desire and later with The Wild Ones (1953)  and On the Waterfront (1954). His career had started to tapper off and, in later years he became notorious for his strange behavior both on and off the screen. Even though the actor still worked steadily throughout the '60's the projects were no where near what what they use to be in his peak. This would all change when he would play the Don in the seminal The Godfather (1972). The movie was not only a smash-hit but it changed cinema and gave the actor an Oscar and a career revival. Like any zeitgeist-defining role it was subjected to parody over the decades.
The Freshman (1990) tells the story of a hapless student named Clark (Matthew Broderick) who is just starting college as a film major. Through a series if mishaps Clark ends up needing money and works for Carmine Sabatini (Marlon Brando) in this whacky mob-comedy. I love a movie that is self-referential, but, I think some movies can get carried away. This is why I thought Freshman might be a slog of self-aware self-parody.
Thankfully though that is not the case. Andrew Bergman does of course reference the famous Brando character and, some clips from Godfather II (1974)  are sprinkled throughout. However, I was thankful that the movie doesn't beat us over the head with meta-ness and Bergman, through a charming and witty screenplay is able to allow the movie to stand on it's very own. For the most part the comedy lands just right and finds a nicely balanced and consistent tone, which can be tricky when dealing with a crime-comedy.
Brando of course is the star attraction and, we get what is probably the closet thing to a return of Don Vito that will ever get. The aging actor carries the role with surprising grace whilst also seemingly in on the joke. We even get Brando paraphrasing one of his famous lines from On the Waterfront, "You could have been a-handbag" instead of the "I could have been a contender". Matthew Broderick is solid up against the legendry actor and, his charm and likeability is on full display. Bergman also fills the supporting cast with talented supporting actors like Bruno Kirby (who was in Godfather II), Paul Benedict, BD Wong, Gianni Russo (Carlo in Godfather I) and Penelope Ann Miller.
The movie has some issues like some plot-conveniences and, I thought a few elements were and characters are slightly underdeveloped. These are minor things and nothing that I think de-rails the overall enjoyment of the film. The Freshman deserves high marks for playing cheeky fun at gangster movies while also finding it's very own voice. Bergman makes us an offer comedy fans cannot refuse.
Picture: Let me first say that I've been a defender of Mill Creek Entertainment who recently has been working hard on sourcing well done transfers as well as trying to provide nice editions of genre titles. Having said that The Freshman is really bad in terms of video quality. The overall image is muddy, flat and lacking any clarity. The opening scene for example takes place outdoors and, what should be a vivid lush image of wild life is muted. Colors are drab and a lot of details get lost in what feels like DVD quality.
Sound: The sound is thankfully not nearly as bad as the image. Freshman makes the grade with a serviceable DTS 2.0 track. The films dialogue comes through nicely with no background distortion. Since this isn't very sound effects heavy you can make due with a front heavy sound experience.
Extras: None
Posted by The Video Attic at 10:27 AM