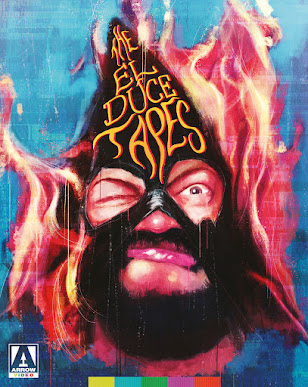 Disclaimer:  Arrow Video has provided me with a copy of this film free of charge for the purposes of review. All opinions contained within are my own honest reflections.
Warning: The El Duce Tapes features talk about sexual violence. It's something that cannot be avoided discussing since its so heavily interconnected with the film. Issues like racism and homophobia are also talked about. Though handled with tact some may not wish to read about such things.

The El Duce Tapes compiles two-years worth of raw VHS footage of the infamous shock-rocker El Duce from the band The Mentors. Donning a black executor and singing about rape, brutality and violence this documentary tries to get to the heart of the man behind the hood in this frank and sometimes stomach turning deep dive. The very first few minutes of The El Duce Tapes kind of made me uneasy, with the subject of the doc talking about violence towards women and promptly gives the camera a Nazi salute. We get a rough VHS footage of a concert where Duce glamorizes the brutality of women in front of a crowd of various aged audience members, mostly male.

So, I must admit that this movie really made me examine my feelings on the nature of free speech and, what responsibility if any does an artist have on the message he/she puts out into the world. Watching someone like El Duce talk about vile things like victimizing women frankly made me sick to my stomach. I reminded myself that violent movies don't make someone just go out and kill. But on the other hand there is something to be said about the normalizing of this behavior as 'being a real man', especially towards young men. Highlighting this is a clip of young Mentor fans meeting El Duce backstage and, again I felt like I wanted a hot shower. What was surprising though is the man himself is full of contradictions such as: playing up this skin-head act whilst also openly hanging out with African American people and, even when point blank asked his thoughts on race that he's not racist. The movie through interviews from El Duce's friends/family claim that his views on women, homosexuals and African Americans is all an act in order to simply push buttons. Though, its worth noting that El Duce himself only really claims he's not racist but is silent about his true feelings on LGBT and women.

Did El Duce really beat/assault women? Its never stated though one cryptic interview with a girlfriend suggested that Duce could get very nasty when drunk, which seemed to be all of the time. A band member recounts Duce spraying various people on a tour bus with his urine which very much would be considered sexual assault. My biggest issue is not that Sexton is documenting this person but that the movie only talks to Duce and people in Duce inner circle. Clearly we are only getting a very one-sided view-point. Towards the end of the film we get this feeling that all the things the Mentors front man espoused is all just an act in order to make headlines and sell records.  It also attempts to paint a picture of El Duce as a victim of abuse by the hands of his father. This claim is also backed up by his sister who was also interviewed.

I'm conflicted because I believe in free-speech and the right for people to make movies and music as they see fit. As a free person I have the choice at what content I want to consume. But, in a way I feel like El Duce and The Mentors was apart of this culture of hate towards women and the LGBTQ community that went completely unchecked. I don't think a documentary on this person is a bad thing actually, but Ryan Sexton only gets one side and thus he paints his subject as this misunderstood guy.  Sure, you can play it off as someone who trolled its audience but you cannot deny that El Duce and his anger and warped world view seemed to come from a very real and disturbing place. Honestly, it would be ridiculous to think that someone watching this would walk away wanting to take up these hateful ideology unless it already was something they believed in. I just wish that the movie presented a more nuanced picture of a person who obviously struggled with many demons.

The El Duce Tapes offers a vomit stained portrait of a shock-rock front man but sadly, Sexton never gets both sides of the story throwing objectivism out the window.

Picture: The El Duce tapes are just that, VHS recordings made primarily between 1990-91. Thus the quality is not ever going to be stellar even when upconverted to 1080p. Having said that I think that presenting it in this raw unpolished way actually adds something in the way of the films mood and unpredictability. I think it was probably a choice to keep the original VHS quality, ala tracking lines etc which I think Arrow could have easily cleaned up.

Sound: The El Duce Tapes provide a DTS 5.1 track. Regardless of the quality of the music being presented I can understand wanting to offer a fuller sound experience outside of a 2.0 Mono track. Overall, the sound is big, bold and of course super crass.

Extras: As always Arrow Video never half-asses their bonus content and The El Duce Tapes has a nice array of extras. Included is a brand new commentary with the El Duce Tapes crew.

The El Duce Sessions- video of the band recording the original score for the film.

Tape 2: Hollywood Reservoir- A raw piece of footage that provides a peek behind the scenes featuring a candid chat between Sexton and Duce.