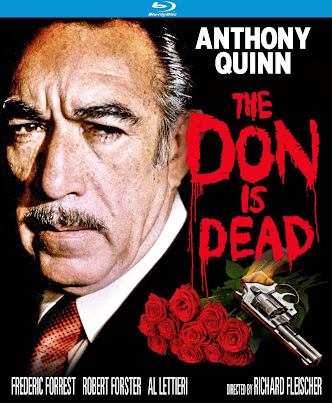 Disclaimer: Kino Studio Classics has provided me with a copy of this film free of charge for the purposes of review. All opinions contained within are my own honest reflections.
Don Angelo DiMorra (Anthony Quinn) puts out a hit on another Mafia leader Frank (Robert Forster) after he brutally beats DiMorra's mistress. DiMorra is talked out of the hit but it's too late and the attempt is made (and failed). Now, it's all out war with DiMorra and Frank's men in this gritty '70's crime thriller.
Oscar winning director Richard Fleischer without a doubt had such an amazingly diverse resume which ranged from '50's noir like The Narrow Margin (1952), Sci-fi films like Soylent Green (1973) and even mob thrillers like The Don is Dead (1973). Coming out just a year after the smash-hit 1972's The Godfather it was official that mob movies were back in style. Don is a movie that isnt what you`d call deep as far as story goes. Unlike Godfather the movie lacks characters with depth and story that feels richly layered and lived in. But, what makes this movie great is that what it lacks in polish it more than makes up for in just being a damn entertaining film.
Fleischer who had been directing movies since the '40's had a good sense of what audiences wanted to see and he delivers. The film is well directed with the director never seeming to half-ass or look down on the material. Sure, its a Godfather knock-off but he aims for it to be at least a damn enjoyable one. The writing is decent enough with a solid story that doesn't have to do a lot of heavy lifting in terms of motivation and is fairly lean with very little in filler material. Every scene is either moving the brisk paced movie forward or developing characters or both. This is what you get when you have a veteran like Fleischer at the helm. The movie is kind of shallow character wise but it does aim for some heart and depth which feels earnest.
This movie is certainly a perfect Grindhouse '70s flick that features exhaust fueled car chases and on-set stunts like men being set ablaze/explosions (that had to be done live).  Don is Dead also has enough fire power to make even John Woo nod his head in approval. Veteran actor Anthony Quinn gives what I feel is a latter career high playing DiMorra and, the two time Oscar winner is not phoning it in and gives the film it's pathos. Cult icon Robert Forrester with his perfectly quaffed '70s hair is pretty amazing as the hot-headed Frank. Again Robert is having fun with the role but also not half-assing it either. The movie is also filled with excellent supporting actors such as Al ALettieri (also in The Godfather), Louis Zorich, Barry Russo and Fredric Forrest to name a few.
This movie is pure fun, turn the brain off popcorn flick that just happens to be directed by an Oscar winning director and featuring outstanding photography by two-time Oscar nominated Richard Kline (King Kong, Soylent Green) and a pulse pounding score by Jerry Goldsmith. The Don is Dead has all the kicks off a '70s 42nd street movie with the added polish of a studio outing. A must watch.
Picture: The Don is Dead is presented in 1:85:1 aspect ratio. I couldn't find any info on the restoration but I would wager to bet it's a 2k scan. The overall film has a nice pop in colors, specifically outdoor and well lit scenes really look stunning. There are some artifacts throughout the transfer with some slight blur and definition lose. This isn't enough to distract though and in my opinion the film still looks really good. Low lit scenes like the one at a restaurant has a nice warm look to it.
Sound: The Don is Dead has a DTS 2.0 track. Dialogue and sound design comes through nicely with no drop-out issues or unwanted background noise.
Extras: The Don is Dead features a commentary by critic Sergio Mims. A overall enjoyable and informative track that is well researched and engaging. Rounding other the extras are trailers for Don and a few other films.
Posted by The Video Attic at 11:58 AM