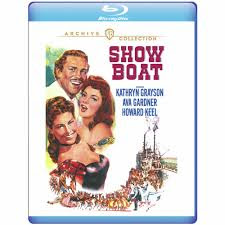 Disclaimer: Warner Archive has provided me with a copy of this film free of charge for the purposes of review. All opinions contained within are my own honest reflections.
Show Boat has been a hit Broadway play and has had three film adaptations. George Sidney's 1951 version see's a captain's daughter falling in love with a smooth talking gambler in this big budget musical. So, going into this review I will say I have not seen the musical stage-version of the show nor have I seen the other two versions and will only be commenting on the film as a whole. Made on a budget of over two-million which would be over twenty-million in today's money, Show Boat is the archetypical big splashy musical that would go out of fashion with 1969's Hello, Dolly which is said to have killed the big budget musical for a time.
I have to say, if you arent already a lover of classic films and musicals Show Boat is fun but probably won't convert you on either front. For me personally the songs are enjoyable, the plot doesn't do a lot of heavy lifting and the acting is good. I will also say that the big brash color scheme really is eye popping in all its Hollywood Technicolor splendor.
I think what sinks this movie is it tries to start a dialogue about race and racism but, it being '51 that message is not effective or even fully formed. In fact its brought up early on and later dropped. The movie also has some Yikes moments with its stereotypical portrayal of African Americans. Furthermore, the movie is on the overwrought side, which you may or may not be here for. Its not that these make the movie unwatchable but it does tend to leave a bad taste in my mouth.
A charming film that is well acted with a stellar performance from its leads Ava Gardener and Howard Keel and some catchy songs but a underdeveloped narrative. Again, I admit that musicals are typically not my thing and, maybe if I knew more about the original stage play I might appreciate this film version more.
Picture: A big, bold carnival of colors is probably the best way to describe the color palate of Show Boat. Warner Archive is renowned for their amazing transfers and this movie is certainly no exception.
This new 4k transfer really is stunning in terms of vivid colors and sharpness in clarity. While grain is present it's keep to a minimum and is smoothed. All artifacts and scratches have also been scrubbed leaving a truly clean clear picture. The only minor thing I noticed was some very minor blurring in a few spots (and honestly you probably wouldn't notice if you weren't looking for it). I honestly cannot imagine this movie ever looking better. If you have this on any other previous medium it's well worth upgrading for this transfer alone.
Sound: Warner's provides both the Stereo Audio Track and the Original Theatrical Mono Audio track.
Extras: Warner's has ported over the previous bonus material for this release including: Commentary by Director George Sidney, Till the Clouds Roll By-Show Boat (1946) excerpt, Cant Help Lovin' Dat Man" with Ava Gardner Vocals, "Bill" with Ava Gardener Vocals and Lux Radio Theater Broadcast of Show Boat (2/11/52) and Trailer
Posted by The Video Attic at 8:16 AM