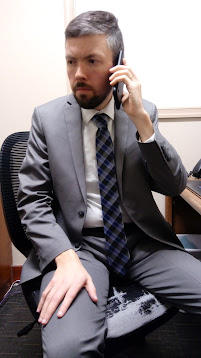 Plot Summary: One morning, a businessman receives a threatening phone call saying that someone close to him wants him dead. Who could it be? He must decide whether the threat is genuine or not, and choose whether to give in to the demands or take the risk.

We use our phone for basically everything these days. From looking up something on the Internet to keeping up with news, social media accounts this modern technology has become a ubiquitous part of our lives. What if that source of connectivity and escape was actually turned against us? What if somebody sinister was on the other end? This is the question that is posed in Matt Barry's short thriller Unknown Number. I have to say from the outset that this premise is great. I think we've all had an unknown call or text that made us wonder who was on the other end of it. Now take that to an extreme and you have something engaging. What further sells this is Barry's fantastic use of sound design which not only heightens the tension but, of course works organically within the narrative. For example. the sharp buzzing of the phone actually made me jump at one point. Really well done. Helping add this extra sense of dread is the cinematography that gives you an almost overwhelming sense of claustrophobic. This is achieved with the use of medium shots. There is also something voyeuristic about the way the camera is placed. Again, this adds to see feeling of Barry's character always being watched. Barry plays the unlucky businessman and performs everything with a nice subtly that fit's extremely well within the construct of the film.  I linked the film down below and I suggest that you check it out as it's a nicely crafted little thriller that would make a great feature film.