Scooby-Doo The Sword and the Scoob (2021) DVD Review 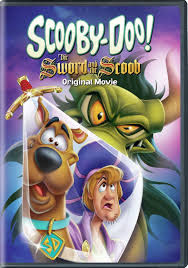 Disclaimer: Warner Brothers Entertainment has provided me with a copy of this film free of charge for the purposes of review. All opinions contained within are my own honest reflections.
In the latest animated Scooby Doo adventure the gang find themselves back in time with the likes of King Arthur (Jason Issacs) and an evil sorceress.  So, despite being a big fan of the IP I've been out of the loop in terms of animated straight to home video Scooby Doo. So, what better time then now to dive right in with Sword and the Scoob. This movie is good but not without it's issues. I'll start with what I feel worked for the movie. The animation is in large part really well done with a slick fresh looking style that is bright and pleasing to the eye.
It was great to see that Matthew Lillard is still doing the voice-work of Shaggy and the actor brings his own flare to the character without simply copying previous voice actors. Frank Welker, Kate Micucci and Grey Griffin are all top notch and they really do their best to bring these characters to life. The writing is very spotting (more on that in a bit) but I will give a lot of credit to some very smart and witty jokes that will appeal to both adults and children alike. The movie also has a couple of interesting tricks up it's sleeves to keep things interesting.
So, even though I thought that the film has some good writing going for it, this is also an element of the film that also is it's biggest enemy. The big baddie here is a evil sorceress and her present in the film feels at time awkward and I wish she was better woven into the narrative. The movie also toys this over arching theme of magic and science but it never feels like it ever picks a lane in this arena. The writers do some clever things with this but I think overall it's never a core-theme that feels like it's been explored or taken as far as it could. And, while I think some of the humor lands some of it falls flat. The repeating joke about Daphne (Grey Griffin) thinking everything is a simulation isn't funny nor does it play into the story. I think my biggest let down outside of some so-so plotting was the fact that the mystery-solving finale didn't have a very satisfying payoff.  Thankfully the film never feels like it out stays it's welcome and comes in at just an hour and sixteen minutes.
Sword and the Scoob features a great voice cast, some fun moments despite a plot that just feels a little paint-by-numbers. Honestly, I think this is entertaining enough for kids who will delight in the films big bold colors and silly humor. As for older fans that still enjoy the franchise, I think it's not the worst I've seen but I think that plot could have used more polish. Overall, a good time but maybe not one I would watch over and over.
Picture: I typically review HD and UHD products but I am perfectly fine with tackling some old fashioned standard-def-goodness. I think with how newer cartoons are rendered they honestly look great even in a lower-fi setting. Such is the case with Sword and the Scoob. The animation still looked very colorful with a smooth slick appearance. Try as I might I couldn't see anything that would de-tract here in terms of visual presentation. Really great job on Warner's part.
Sound: Sword and Scoob features a really nicely done DTS 5.1 track. The films sound design and effects come through strongly with dialogue coming through crystal clear.
Extras: Sword and the Scoob features three animated programs with Knights theme. This includes: The Scooby Doo/ Dynomutt Hour "Scared a lot in Camelot, Scooby Doo Where Are You! "What a Night for a Knight, Scooby Doo Where Are You! "Hassle in the Castle"
Rounding out the features are Trailers.
Posted by The Video Attic at 2:04 PM