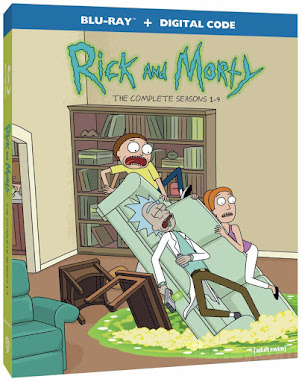 Disclaimer: Warner Brothers Entertainment has provided me with a copy of this film free of charge for the purposes of review. All opinions contained within are my own honest reflections.
Unless you've been living under a rock, I'm assuming everybody is very familiar with the huge hit Rick and Morty which started in 2013 and is still going strong when it was announced in 2018 the show had been picked up for seventy more episodes. So, its safe to say that Rick and Morty will be having adventures for a very long time to come. While fans eagerly wait for the fifth season Warner Brothers has released the first four seasons in one fantastic set. Please note that it looks like this is the exact same releases as the individual sets packaged together. This means all extras are the same and have been ported over. If you have not owned the previous four seasons and are getting this to get caught up with the series I will be breaking down the features and I will be doing a breakdown overall in terms of quality pic/sound/extras wise for the entire four-seasons.
Its worth noting that this release comes with a special poster. 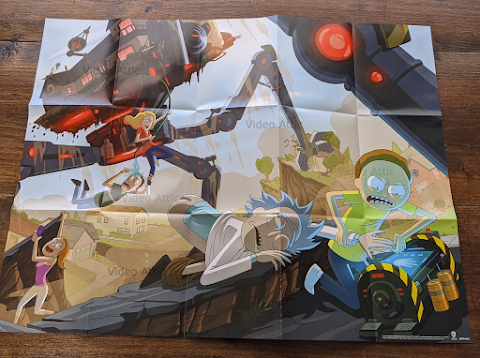 Thoughts on the Series: I came to the show a little later and started binge watching it right before its third season premier. With its high concepts married perfectly with low brow antics I instantly knew this was something incredibly special and, the hype was well and truly earned. Sadly, like any fanbase you have people that gatekeep and bring really toxic ideology to the franchises they profess to love. Rick and Morty has gotten a bad rap from such people. It got so bad that season four seemed to address this in a few of its episodes. This sucks because a lot of people, myself included just love the story for its smart writing, clever wit and engaging world building. For the most part I think the series has been consistently great in its writing with the finale of Season 2 being a truly stunning piece of television. Seasons 3 also gave us the now iconic Pickle Rick in an episode that is among my favorites of the entire series. While it had its strong points for me personally Season 4 is something off a mixed bag. It had some fun episodes but only a few that really stand out. But, certainly nothing bad enough to warrant not being beyond-excited for upcoming episodes. The series is notorious for taking a long time to produce and with COVID this must likely delayed things further. If you've never seen Rick and Morty and have been turned off by its "fans" I implore you to watch anyways and remember that these few don't in my opinion reflect the show or the brand.
Season 1: Disc One: 11 Episodes
Extras: Commentaries (featuring guest tracks: Matt Groening, Robert Kirkman etc), Behind the Scenes Featurette, Animatics for each episode. Deleted Scenes.
Season 2: Disc Two 10 Episodes
Extras: Animatics for each episode, Deleted animatic sketches, Featurette, Episode Commentaries
Season 3: Disc Three 10 Episodes
Extras: Commentaries on every episode, Animatics for every episode, Inside the Recording Booth, Origins of Rick and Morty
Season 4: Disc Four 10 Episodes
Extras: A Day at Rick and Morty: Side Season Four Creating Snake Jazz, Directing Rick and Morty Inside the Episode, Samurai and Shogun, Prop Process, Character Creations, Animation Challenges.
Picture: Seeing how such disc contains the entire season plus extras I was skeptical on the quality but, Warner Brothers as always delivers the goods. A crossed all four seasons the 1080p has a nice crisp clean look and it really showcases the incredible animation. Colors are vivid with a sharpness that retains a lot of fine detail.
Sound: Equally good is the Rick and Morty sound design and WB provides a robust big sounding Dolby TrueHD 5.1 track. This is a series that has a lot of action and sound design so you really do want the powerful sound experience of a 5.1. On a sound system the sound effects really offers a nice complex 3D like experience.
Final Thoughts: Obviously, this set is for anybody that hasn't collected the prior seasons. The only additional product is the poster. The value is good overall if you have not bought any of the seasons before hand. Sure, you can watch the series on HBO Max but WB has provided a nice array of bonus content for fans to pour over. The quality in terms of picture and sound is really stellar as well and I think you really get the biggest bang for your buck. And, with that extra money you can play some games at Blips and Chipz!
Posted by The Video Attic at 10:45 AM