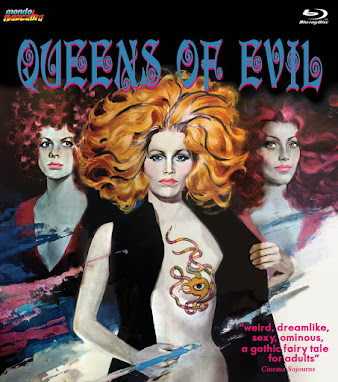 A young hippy named David (Ray Lovelock) finds himself staying with three mysterious women after a auto accident. What turns into a care-free romp with the three beautiful sisters starts to turn into a nightmare as the trio hide terrible secrets.
It sounds like a cliché but Queens of Evil is a hard movie to review because it really needs to be seen to fully grasp the lunacy behind it. The entire movie has this off-beat feeling that only gets more intense when our hero David meets the three beautiful sisters decked out in their finest fright wigs. Once the trio drift into the story the film takes a sharp turn into a surreal dream-like state. Brilliantly, the director achieves this effect by giving sets and costumes this grounded, yet otherworldly vibe. The house in which the sisters live in is a perfect example of taking a conventional space and making feel totally off-kilter.
Queens of Evil is a movie that is a slow-burn and, it honestly takes a good forty-minutes for it to really kick into gear. If you are brave enough to muddle through a nearly non-existent plot this movie does have its fair share to offer. This is the height of '70's low-budget trashy fun masquerading as an arthouse, oversexed Euro horror outing.  Director Tonino Cervi really swings for the fences and fills this movie with tons of sex and nudity and, though tame compared to other films it doesn't shy away from frenzied violence.
The back cover for this release describes this movie as a fairy-tale like film and, I think that is spot on. It very much has a acid-trip like quality that is so painfully of it's time. My biggest issue is that I think they could have even pushed the more surreal elements even further and really went for and all out visual assault. Because you dont really get much as a cohesive story and no real character development so you really only have the mad-cap stuff going on to keep you engaged. I think that if you are a seasoned Euro horror fiend will likely find this a twisted flick that will hit the spot.
Picture: Mondo has another stellar release. Queens has a crisp clear look with most all scratches and artifacts being scrubbed. Colors are vivid and sets and locales really have a nice depth in detail. Grain level is also well maintained retaining that wonderful film quality look. I've never seen this film in any other format but one only has to see the unrestored trailer to get a good idea at the hard work Mondo has put into providing a nice looking visual presentation.
Sound: Queens of Evil has a DTS 2.0 sound. Audio is well maintained. Dialogue comes through nicely with no distortion or unwanted background hiss.
Extras:  Queen of Evil features a wonderfully engaging  commentary with Kat Ellinger and Samm Deighan. As always the duo are well researched and fun to listen to. The disc also includes:
Interview with Ray Lovelock (26mins) and two alternate scenes: Forest Chase, Empty House
and Trailer
Posted by The Video Attic at 7:17 AM