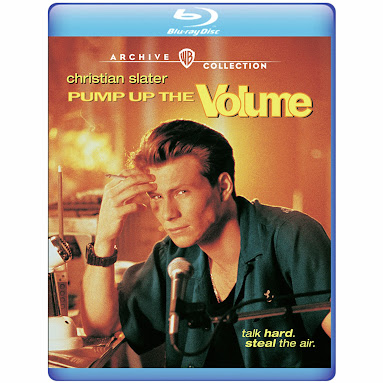 Full confession, I have never even heard of this movie prior to it's Warner re-release. Yet, the feedback upon its release seems to suggest that this was a must-watch cult-classic. This certainly peaked my interest enough to want to check it out. Mark Hunter (Christine Slater) is a disaffected student at a new high school, away from his friends. He blows off steam by setting up pirate radio station donning the name Harry Hard-On and using a voice-changer. His prated radio shows starts to catch fire with the students at his school who start to rebel against the system.

It's kind of interesting that, the year prior to Pump Up the Volume was released, Slater had another cult-hit with Heathers (1989),  a savagely dark take on high-school life. Volume is what you might consider Heathers Ultralight. Both movies examine the jungle of school life and how the world of being a teenage can be brutal, not only with out of control hormones but also teachers and parents sometimes making it worse with their  uncaring and unsympathetic attitudes. And, of course both movies features Slater as someone who bucks up against the status quo. However, where the two films sharply split is how Volume is a vastly more optimistic though its also deeply cynical on the state of American free speech.

Director Allan Moyle wastes no setting the films kinetic  anti-establishment tone with aid of some nice editing and, we the audience get plunked down in the middle of one of Slater's on-air pseudo-philosophical society sucks classic teen-angst rants. I felt myself groaning and wondering what I had gotten myself into. However, thinking about it more this must have been mind-blowing concepts for similar disaffected youth that never heard such ideas express. This movie really does aim to connect with its young audience in a way that feels not cynically motivated. It also helps that Slater was wisely cast as the brash, charming rebel as the center hero and viewpoint character. Pump Up the Volumes themes of free-speech and having a platform to use that for good or bad  is even more applicable in the age of social media.

Yes,  the movie is on the hooky side and I think that Moyle plays things a little too safe in terms of driving his point home. Also viewers are asked to gloss over things like nobody realizing Slater is Harry Hard On despite the fact that Slater's Jack Nicholson inflection is unmistakable.  What I think saves the movie is it has this incredibly earnest viewpoint that makes it easy to get swept up into it's core message. Though I think it is a bit on the sanitary side I will give the filmmakers for being very processive. For example, in a gut-wrenching moment a gay student calls into the show and recounts his abuse by some local jocks. What is amazing to me is, this teen character was not othered, nor was he used as the butt of any jokes. Again, this perfectly fits in with the over-arching theme of giving voices to those that feel like they have none. This taken to a beautiful finale which nails the point home without coming off as preachy.

You can also make the argument that it helped usher in this more honest and raw portrayal of teen life that the '80's John Hughes sugar-coated for the masses. Again, I think this deconstruction of teen life was done better in Heathers, though this certainly is a less bleak alternative.  Tune in to this '90's cult-classic thanks to Warner Archive.

Picture: Pump Up the Volume certainly does not disappoint on 1080p. Colors are given a nice uptick (though it doesnt say this seems like a 2k transfer) and you can really see this in regards to clothing, clothing texture, locales and sets. Night scenes are also benefitted from this new transfer with deep and well balanced blacks. This movie has a visual flare and WA has taken care to showcase this. Fans of this movie will be in for a treat and, can retire their old DVD.

Sound: Seeing how Pump up the Volume has a great soundtrack I was happy to see that WA provides fans with a great DTS 5.1 track. Music gets a nice range and of course dialogue and sound design is crystal clear.

Extras: Pump Up the Volume includes a trailer.