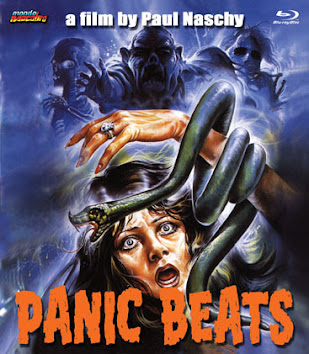 1983's Panic Beats wastes zero time with thrusting the viewers into a creepy  fog filled forest where a nude woman is being chased by a armor-clad man on horseback. Things....as you can imagine do not end well. Paul Naschy may have more iconic movies but, for my money Panic Beats is a twisted crowd pleaser which I have owned since it's DVD release. I wanna mention quickly that I will be keeping this review on the vague side in terms of plot points because I don't want to spoiler it for anybody who has not seen it. The plot centers around a husband taking his ill wife to stay at his family home to recover. The house however has a dark past filled with sadist torture and death.
What is so striking right away is Panic Beats is very much steeped in high-Gothic aesthetics. This is something that is a staple in most Naschy films and, in interviews Naschy has always said writers like Poe were big inspirations for his work.  Besides a quick flashback the movie takes place in modern times yet, the old world look and feel clashes violently with the new, which is echoed in the main narrative thread. The Spanish director also seems to relish in injecting surreal  imagery that makes the entire thing feel like a dread-filled nightmare. Beats also doesn't hold back in terms of brutality and,  Naschy delivers gut-ripping gore in a finale that can only be described as blood-frenzied.
Clearly Naschy took some cues from the American slasher craze but, also infused his love of Gothic-horror to create something pretty special. Like most of Naschy's movies you have to suspend disbelief and there are some gaps in logic. However, the movie has enough twists-and-turns to keep the movie engaging, along with some nasty surprises. Rotten corpses, bloody eye balls and a undead madman in a suit of armor is but a few sinister treats in store in Panic Beats.
Picture: As I mentioned in my review I have enjoyed this movie since it was released in standard-def and I've probably seen it a handful of times. I recently compared the two and, of course the 1080p is richer in color and sharper in overall clarity. Grain levels are impressive in how minimum and fine it is throughout. Color tempts are also really well maintained. Even scratches or artifacts are nowhere to be seen. It's just impressive all around.
Sound: Panic Beats has a DTS 2.0 track. Dialogue comes through nicely as does the sound design. This is a front heavy sound experience and is really robust. There is also little to no background hiss or distortion that I noticed. Overall a well done track.
Extras: Mondo as always provides some nice extras. This includes commentary by Rod Barnett and Troy Guinn of NaschyCast
Paul Naschy on...His Life in Cinema (28mins) This vintage interview is highly interesting and Naschy talks candidly about his films and early influences. It also is a cool look at early Spanish horror.
Paul Naschy Spanish Interview (36mins) another great interview with Naschy.
Posted by The Video Attic at 10:57 AM