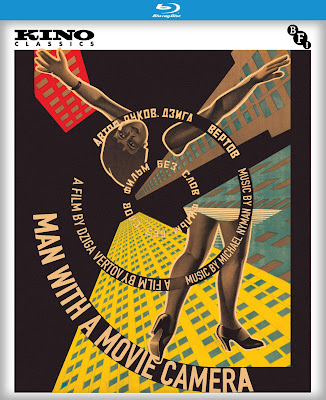 I like to think of myself as someone who loves to devour every kind of film, no matter the genre or region it was made. I realized that I had missed this landmark '20's era silent film made by Soviet director Dziga Vertov. A man travels around the country capturing the sights and experience of urban life. A large focus is on production both in work and in relaxation. Vertov lets us know right away that this is a completely silent film (though silent films were pretty much out in favor of sound-at least in the Western world) and would present no title cards. Wow. This was certainly a intensely interesting dive head first into celluloid madness.

Director Dziga Vertov presents a non-linear film that presents a rare snap-shot into Soviet life and ideology. This movie poses a challenge in not only it's non-narrative and deconstructive nature but, it acts as a cypher for the audience to decode what the images are trying to convey in the order they are presented. I will say it's a movie that is probably not for everybody and thats OK.

The movie is also a landmark in terms of style. Vertov's film is said to have introduced such techniques such as: jump-cut's, split screens, backwards footage and Dutch angles just to name a few. While, as I mentioned the movie has no plot, it's been often said it promotes the idea of labor as being a source of pleasure and indeed the film has plenty of shots of working class people, machines grinding away and the general idea of unity through work. This is in keeping with this ideal's of Marxism. There is also this really interesting Meta-text as, we see Elizaveta Svilova (wife of Dziga Vertov) actually editing the film within the film.

Side note: It was interesting to learn in the commentary that editing was considered a woman's job in early cinema abroad. The editing it's worth noting is just incredible in it's pin-point precision but at the same time has this kind of controlled chaos. I don't think I've ever seen anything like it before or since. I don't proclaim to be a scholar on the works of Vertov or even Soviet cinema but, I think this is an amazing piece that not only expresses what can be done with film but pushes its boundaries like never before. For students of film this should be considered a must-watch!

Picture: Kino Classics presents Man With a Camera from a restoration done by the BFI. The film as it's presented is rough with scratches and artifacts. This leads me to believe that the films original elements must have been in bad shape. This is not to suggest this restoration is bad by any means and considering the amazing work both Kino and the BFI this is most likely a vast improvement.

Sound: Man with a Camera has a DTS 2.0 track. Music and sound design comes through nicely. Very little in way of unwanted background noise.

Extras: Kino has provided some great features that help put the feature into a historical context. This includes a feature length commentary by film historian Adrian Martin. Martin is truly an impressive scholar and helps spot a light on the genius of this film, the filmmaker and his ideology.