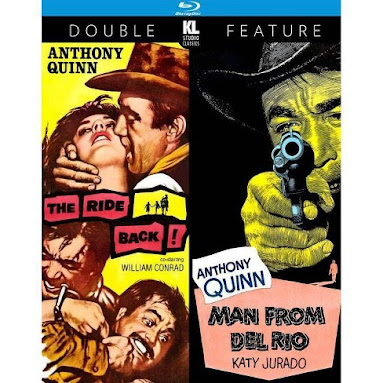 A gunfighter named Dave Robles (Anthony Quinn) enters a sleepy town and, ends up killing a local outlaw after drawing on him. Word quickly spreads from the good and the bad that Robles is a quick-draw killer. A shady saloon owner wants to use Dave whilst the town wants to use him to run out the outlaws in town. Neither one cares for him expect a local named Estella (Katy Jurado). Director Henry Horner has two Oscar wins under his belt but, oddly enough not for directing. These awards were for Best-Art Direction on 1949's The Heiress and 1961's The Hustler. Man from Del Rio marks the first feature directed by Horner to receive an HD treatment in the US.

Man from Del Rio is a western that has some interesting ideas about pride, self-determinism and what kind of honor there is in taking lives, even if it's justified. While these topics are gently touched upon I think that sadly, Horner and screenwriter Richard Carr never explore these topics in any way that is interesting. What we get is a fairly myopic western that could have been a lot more interesting with a more polished script. I will say the finale (and I won't spoil it) does subvert expectations which was refreshing.

Picture: Man from Del Rio sports a nice new transfer on 1080p. The contrast between the black and white is handled well with deep blacks and whites that arent overly washed out or bright. I noticed only the faintest amount of artifacts within the print but, overall is stunning in terms of depth in clarity.

Sound: Man from Del Rio has a DTS 2.0. Dialogue and sound design come through nicely with only some faint background noise present. With a movie that is not effects heavy this front heavy track does the trick.

A sheriff named Chris Hamish (William Conrad) in a last act of redemption goes to Mexico to bring wanted man Bob Kalle (Anthony Quinn) who may or may not be guilty of murder. After being stalked by an Native American tribe, the duo must work together to survive.  In terms of overall quality, The Ride Back is by far the better of the two films featured in this set. While Del Rio has it's high points The Ride Back features a more complex story and fleshed out characters.

It's rare when we get a western that presents both the lawman and 'outlaw' as well rounded and complex characters. Indeed, while the film has its share of action it also allows the thing to feel like a character study. Conrad's Hamish you could argue is the more deeply flawed of the pair, though both men are neither all bad nor all good. Anthony Quinn and William Conrad are both great and while each have room to shine, they truly play off of each other. Harrowing, exciting and offers a rare film where both the sheriff and the 'bad guy' are flawed but overall decent men. Honestly, despite a rather slow start this film pleasantly surprised me in terms of it's depth.

Picture: Ride Back is simply  stunning in terms of it's newly mastered transfer. This moody black-and-white film has a wonderfully balanced contrast between its deep blacks and crisp whites. The film also offers a nearly flawless clarity with with pretty much every scratch and artifact scrubbed clean. Grain levels are mostly well maintained with only a few moments where it gets a bit heavy. Kino Studio Classics never disappoints when it comes to doing great new transfers for even smaller outings like this.

Sound: Ride Back is 'saddled' with a very nicely done DTS 2.0 track. Dialogue and sound design comes through nicely. This is a front heavy channel and I am happy to report that any unwanted background hiss or noise has been cleaned up.

Final Thoughts: Man from Del Rio and The Ride Back feels like a time capsules as US westerns which were once big business yet by the late '50's/60s they were on the way out. The genre would find a new life a about a decade later on the small screen with shows like Have Gun-Will Travel, Rawhide, Maverick, Bonanza and later  Gunsmoke etc. It's not to say nobody made westerns on the big screen but it was typically a genre-mash up like western-comedies such as Support Your Local Sheriff (1969) or Blazing Saddles (1974) Or western-musical with the ill-thought out Paint Your Wagon (1969). Rio and, The Ride Back (1957) certainly feels like swan songs of truly serious westerns made in America before they would all but disappear until finding new life after Unforgiven (1992). Now, I am by no means an expert on the western-genre but, thanks to Kino I've been interested in checking out more of these films. And, if you are not a big fan of this genre I think it's always worth pushing ones self to seek out different types of films. Also, you can't go wrong with Anthony Quinn in really anything.