Interview with Josh Ruben He Talks Scare Me and His New Film Werewolves Within!

Video Attic Exclusive: Interview with Josh Ruben from Scare Me and Werewolves Within!
Writer, actor and director of Scare Me Josh Ruben dropped by the Video Attic to talk about 2020's Scare Me, its home video release March 2nd and his upcoming film Werewolves Within. Scare Me is currently streaming on the horror platform Shudder link HERE Link Opens in a new browser 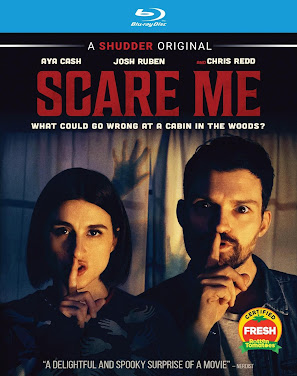 VA:  Working on CollegeHumor videos, did that quick format help you keep pace with Scare Me's fourteen day shooting schedule?
JR: Oh yeah. I didn't go to film school but I did learn the facts of backdoor routes to filmmaking basically by making my own stuff with a bunch of my friends one of which is Sam Reich who now actually owns  CollegeHumor. But, we would make sometimes three even four sketches a week and even by the time I left and I was there from 08-013 I had basically had seven years of shooting sketches that I was in, writing sketches Monday that would shoot Friday. In directing sketches we wouldn't even scout locations, often times we would be seeing the location for the first time on the day of filming.
It was a hell of a film school.  I had directed at a slightly quicker pace at a professional level in the commercial world. So, by the time that Scare Me rolled around, as much as I wanted to get famous and make my first movie (laughs) by the time I was a teenager or my early twenties but I was no better prepared then I was at thirty-five.
VA: I'm sure the feature is worlds apart from the short format you were use to.
JR: Yeah. It was still tight. We shot that movie in thirteen days, we had Aya for nine days, we shot Chris for about forty-eight hours. We had Becky Drysdale for about a day and a half as well. We were fighting snow and all kinds of weather issues but we still technically wrapped with what I would say was a few hours ahead of schedule which is pretty crazy.
VA: Wow. Thats impressive. What was it like pitching a movie like Scare Me which is very minimal in nature. That must have been difficult?
JR: I wouldn't say it was difficult. I think the hardest part was that none of us other than Chris and Aya weren't very well known. The criminal thing about You're The Worst is that it's something you`ve either heard of and love it or have never heard of it. It has this almost cult-like hit in a way but, now The Boys has made her a household name. So, I think the hardest part of pitching was there weren't any big names catapulting this film or anchoring this film with a built in following. So, I was really pitching myself and the best that I could do and point out everything I've done from commercials and short films to a pilot a made for Netflix that Matt Damon and Peter Berg produced that will never see the light of day.  (Laughs) All you can do it say, "Trust me, I can do this". I think the most appealing thing to the investors and the my sort of pitch in the beginning is this is almost quite literally two people in a house acting out scary stories so you`d even be saving money on props. It's all sound design and all performances. So, it became this appealing thing or this intriguing thing for the investors and anybody coming on board. Its like, A I haven't heard of this before and B your saying something about the current state of the world and the state of the culture which is a commentary on toxic dangerous emasculated men.
VA: And, thats the thing, Scare Me is a movie that has a message but never becomes preachy, it really walks that fine line which is a credit to the sharp writing.
JR: Thanks. There was an urgency to Scare Me that I did not take for granted and I now going to sort of put myself to the ringer on that any project I do has to have a kind of urgency to it you know. You gotta be saying something even if it's, don't judge a book by it's cover. That messaging is why a big part of Scare Me exists and how it happened so fast.
VA: So, I know that had contacted Aya Cash first to play Fanny but did you have any back-up actors in mind for the role? 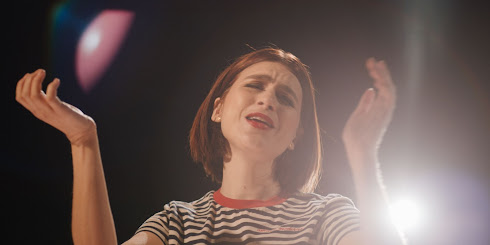 JR: This is the thing. I only reached out or listed people that I knew. Aya was not only the most talented person that I was closet and probably the most famous person I was closet to but also she lived near where we wanted to shoot in the Hudson Valley. So, my pitch to her was, "Hey, do you wanna do this weird, different movie that says something about the state of the world today about gender dynamics?" She had just done an amazing interview in The Cut talking about going out for these just absolutely sexist roles where she would be bikini clad or just the woman would just be in service to the male counterpart protagonist and that would be her sole purpose. She wanted a challenge so I said, "Hey you wanted a challenge to do all these voices and stuff" and she said, "I meant like a period piece not doing a Crypt Keeper voice". She has a great reputation for being a wonderful collaborator. A big conversation with her initially (which was the same conversation I had my cast of Werewolves Within) was asking "How do you like to be directed? How do you like to work?" Establishing that is a important thing to do as the director. It's what made working with her and Chris and Becky a dream. All of them have live-performance background, they all have collaborative DNA. Thats what made it easy despite all of our challenges.
VA: You can really tell in the film that everybody has such great chemistry.
JR: I'm really glad that Aya and Chris got along so well and played really well into our kind of dynamitic. It was great I am really happy with how it all worked out, how they were all down-to-clown. 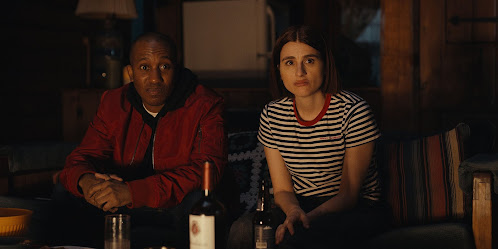 VA:  Are you open to your actors ad-libbing?
JR: I didn't really have time on Scare Me to go off-script at the very least to do an extra take here or there on the occasional moment where it felt appropriate. For example, like you`ll see in the DVD extras one or two of the outtakes one of them was scripted and the other was, "Hey since were already rolling on Chris why don't we keep acting out different ways of killing each other on a snowy night."  Some of the more vitriolic criticism of the movie is like, "Well, this is an improve movie and these actors are just improvising, there's no script." I love letting go off-script, I love letting people play around but for the most part these guys really stuck to the script. I encourage them to make all dialogue their own and not to stress the "ums" and "I's". But we just didn't have the time to improves. It was something I was flexible on but didn't encourage just because this was a thirteen day shoot. When you don't see Aya in shot with me, especially in the beginning part of the movie leading up until when Carlo (Chris Redd) arrives Aya wasn't there I was reading with my fiancé who was working on Fosse/Verdon.
VA: Wow.
JR: Yeah, it was crazy.
VA: What's your favorite story in the film? 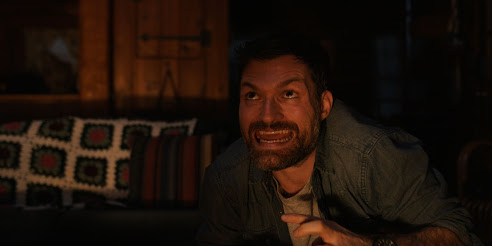 JR: Oh man, hmm. I love them all for different reasons. Like, I love Grandpa and Venus because I could just sit back and watch these actors sort of from a selfish directing perspective and enjoy the show. I have really fond memories of anything I'm not involved in. So, Werewolf would probably be my least favorite because I was the most nervous and also we kept revisiting and sort of cobbled together that sequence in so many different ways. We realized that we had forgotten set-up's or we were or weren't going to have Aya for certain days for reactions. So, it was a very patchy one. I think troll was the most fun because it's not only written as an homage to Stephen King's Cats Eye troll which scared the shit out of me as a kid. It was just quick paced ridiculous Tales from the Crypt like two-hander with Aya. We had such a good time raising and lowering the camera and speeding through it. It's so punchy and wonderful, that was a great one to do and I'm thrilled with how it turned out. 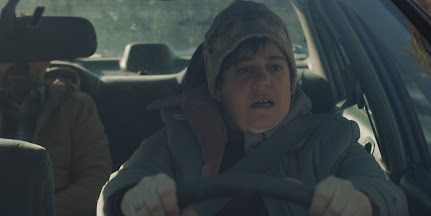 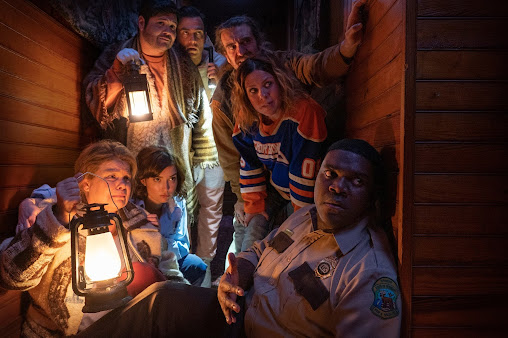