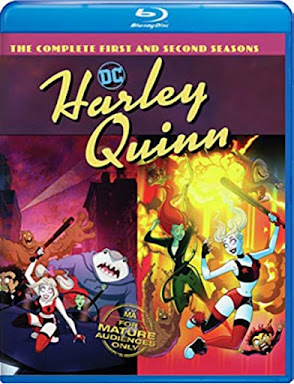 Were all just living in a punk-rock-glitter fueled world of one Harley Quinn and I am here-for-it. Most recently the insanely talented Margot Robbie has brought the colorful whirlwind of chaos to life, first in the much maligned Suicide Squad (2016) of which she was the best part. More recently she shines in Cathy Yan's brilliant Birds of Prey (2020). And, we are all excited for her return in James Gunn's 2021 The Suicide Squad. And while we all wait for Gunn's film we at least have the animated antics of Harley Quinn to tide us over.
So, I have to say I was highly excited but also leery because I love the character and you never want them to be reflected badly. Thankfully,  I could breath a big sigh of relief as showrunners Justin Halpern, Dean Lorey and Patrick Schumacker really do justice to not only Quinn but other DCEU characters. As the front cover of this release makes clear this is squarely aimed at a mature audience.
This seems perfect for the former kids that grew up with Harley Quinn from the Batman: The Animated Series (she made her first appearance in the groundbreaking series after all) who are now grown up and looking for more edgy content.
Harley offers plenty of tightly plotted, witty writing that makes for breezy, enjoyable watching. Also, I have to give the series huge props for featuring LGBTQ+ content ala Quin and Ivy's relationship which has been only teased in previous media. The animation is great with some stellar voice-acting from Kaley Cuoco as the titular Quinn, Lake Bell as Poison Ivy and Alan Tudyk who does a variety of voices including the Joker. While the first season has its share of highlights I think it really hit's its stride in the second season where it finds a consistent tone. The showrunners push boundaries but I never felt like they went overboard in its mature content. Couple this with some fantastic animation and voice-work and you have a worthy entry into Quinn's brand of sparkly chaos.
A third season has been ordered so now is the perfect time to dive right in.

Picture: Warner's truly does an excellent job with their back catalogue both in terms of live-action and animation. Harley Quinn really explodes in terms of color. The slick animation really pops with clarity and rich detail retained in 1080p. This is a visually awesome show and the vivid transfer does it justice.

Sound: I was happy to see or rather hear that Harley sports a DTS 5.1 track. This, in my opinion really deserves a bigger upgrade in sound and it packs a big punch. Those of you with a sound system will notice the range in terms of left and right channels.