BREAKING NEWS IN YUBA COUNTY ARRIVES ON DIGITAL AND IN SELECT THEATERS FROM MGM’S AMERICAN INTERNATIONAL PICTURES (AIP) AND ONTO BLU-RAY™ AND DVD FROM WARNER BROS. HOME ENTERTAINMENT

ARRIVES ON DIGITAL AND IN SELECT THEATERS

AND ONTO BLU-RAY™ AND DVD

See it on digital and in select theaters now

Own it on Blu-ray and DVD on March 23 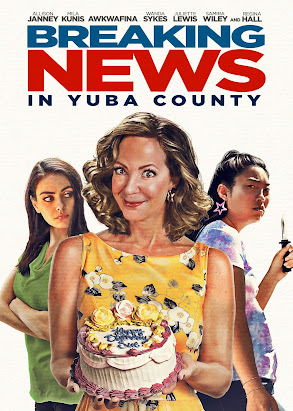 Burbank, CA, February 16 – The dark comedy “Breaking News in Yuba County,” which is available on Digital and in select theaters now from MGM’s American International Pictures (AIP), will arrive on Blu-ray and DVD on March 23.

On March 2, the film will be made available digitally on Video On Demand services from cable and satellite providers, and on select gaming consoles.

After her husband goes missing, Sue Buttons (Allison Janney), an under-appreciated suburban wife, gets a taste of being a local celebrity as she embarks on a city-wide search in Yuba County to find him. In an effort to prolong her newfound fame, she stumbles into hilarious hi jinks as her world turns upside down, dodging a wanna-be mobster (Awkwafina), a relentless local policewoman (Regina Hall), her half-sister (Mila Kunis) a local news reporter desperate for a story, and her husband's dead-beat brother (Jimmi Simpson), who all set out to uncover the truth behind the disappearance.