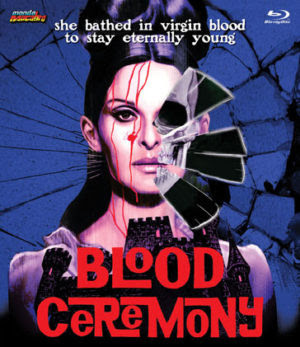 Blood Ceremony also known as The Legend of Blood Castle (1973) is yet another re-telling of real life serial killer Elizabeth Bathory who bathed in women's blood in order to stay young. An aging Countess (Lucia Bose) will stop at nothing to retain her youth. She finds out that the blood of virgins helps maintain her youth. Thus, she kills and drains women to aid her quest.
In terms of movies that center around on or rather re-imagine the crimes of Bathory my favorites are Daughters of Darkness (1971) and the campy Countess Dracula (1971). Jorge Grau (Let Sleeping Copses Lie) take's a low-budget outing and really gives a lot of polish. He does this with some very well done production value overflowing with great sets and practical interiors, nice use of locales and costumes. The plot is pretty much what you`d expect with a lot of the same beats as other Bathory type films. However, Ceremony is just off-beat enough to be a stand out on it's own.  It's teeming with this wonderful Gothic-Noir sensibilities coupled with a European flavor.  It also helps that Grau doesn't skimp on loading the film up with tons of sex, nudity and over-the-top gore set-pieces. Some of the on-screen violence is actually really effective in it's frank brutality.
Blood Ceremony is a movie that flew under my radar but, is actually a refreshingly, well made offering that fuses sex, blood and Euro Gothic into one satisfying bite.
Picture: Blood Ceremony really knocked me out with it's transfer. The film impresses with a new 4k transfer from original elements. Colors are well balanced and really pop.  The excellent production value and Gothic flourishes truly stand-out here. Grain is well maintained leaving an overall effect of a clean crisp transfer.
Sound: Blood Ceremony has a well done DTS 2.0 track. Dialogue comes through nicely. The International version has an option for the original Spanish language with English subtitles.
Extras: The disc includes the Spanish Version of the film, The International Version, and International Version (Spanish with English Subs).
Two commentaries: One from author and historian Troy Howarth and Nathaniel Thompson. And, the second by Robert Monell and Rod Barnett. Both commentaries are extremely well researched and, most importantly are engaging. Also includes is two vintage interviews with director Jordi Grau: Getting Started (15 mins) and Jordi Grau on Blood Ceremony (26mins). Rounding out the features is Press Book Gallery and Trailers.
Posted by The Video Attic at 12:36 PM