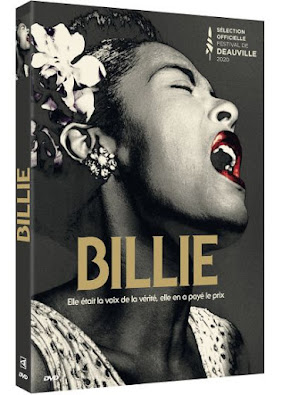 Billie Holiday was a legendary powerhouse in not only the jazz but music in general. Linda Kuehl had compiled countless hours of rare audio interviews for an intended book. The book never happened but the material has now been repurposed into the stellar documentary Billie. Director James Erskine tells the story of this icon from her early days, her controversial arrest and drug usage and her well earned status as a groundbreaking musician. Helping tell her tell her story is a wealth of audio interviews as well as rare television interviews and archival footage and photos. We really get a glimpse at the person behind the music. This addresses the long standing open secret that Holiday was bisexual and had affairs such as at rumored romance with actor Tallulah Bankhead.
What's interesting is this also tells the story of the author as well. As a fellow author I found this a really fascinating aspect of the documentary. Though, I will say as engaging as this element is it feels a bit awkward at times. Especially at the end when its strongly suggested that the author had died under mysterious circumstances. It just felt like that could have been its own short documentary subject. Overall, I think that Erskine does a great job at finishing Linda's work which took almost a decade of her life. This is probably the clearest picture of Billie we may ever get. Seeing how these interviews were recorded in the '70's its safe to say pretty much everybody in the audio recordings have since passed away making these incredibly important artifacts in the world of jazz.  Yet, we also get a snapshot into the obsession of Linda Kuehl in trying to bring this picture of the famed star to life. A flawed but highly effective documentary that should be considered a must-watch for fans of Billie Holiday and of jazz music.

Picture: Billie is presented in 780p standard def and, of course suffers from a slightly low-fi look. But, I will say that since this is a documentary with mostly archival footage and photos I don't think this detracts from the overall presentation.