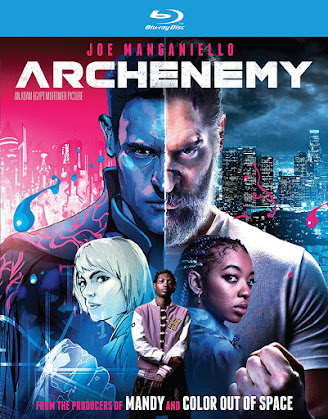 Disclaimer: RLJE has provided me with a copy of this film free of charge for the purposes of review. All opinions contained within are my own honest reflections.

2020's Archenemy is director Adam Egypt Mortimer third feature length film (I'm not counting shorts and his segment in Holidays -2016).While his first feature Some Kind of Hate (2015) failed to connect with me his second film Daniel Isn't Real (2019) was a blast. His latest film tackles the sci-fi/superhero genre but in typical fashion he turns the films troupes on their head. A young journalist named Hamster (Skylan Brooks) is looking for a breaking virial story. He finds a homeless man calling himself Max Fist (Joe Manganiello) who claims to be a hero from another cosmic world.

In a world that is now dominated by superheroes in pop-culture, it would only be a matter of time before people would start to both satirize and deconstruct the archetypical hero mythos. Comics like the game changing 1986-87's Watchmen by Alan Moore and more recent things like 2019's The Boys all managed to do this in a rich, complex and entertaining way. Archenemy in this regard sets itself up for failure because this idea of re-contextualizing heroes is already been there done that, unless it's something really special. That's a very high bar for any filmmaker to jump in a single bound.

I will give the director credit in how utterly fearless he is when diving head-first into a neon-sci-fi world grounded in a modern city backdrop. Overall though, it just doesn't work.  Mortimer strives for this Sci-Noir in the vein of Blade Runner (1982) sadly though, it feels hollow. It seems like the filmmaker has a lot to say in terms of viral-marketing, the state of pop-journalism and what it means to be a hero in today's world yet, these provocative topics are never explored in a deep meaningful way. It seems like world-building is suppose to be happening but the said world and characters for the most part felt really shallow and underwritten. I wonder if part of the problem is runtime. This may have been better as a series that had more breathing room.

On the bright side the film is brash, bold and clearly Adam had a interesting vision. Visually the movie is outstanding with some great cinematography by Halyna Hutchins (Treacle) who, gives the film a polished and big look on what I assume was a modest/lower budget. Don't be shocked when Hutchins wins an Oscar someday. The animated sequences is something I think you`ll either love or hate, and I think I'm in the former camp. However, I thought it was at least interesting way to convey backstory. The cast is also fantastic with Joe Manganiello giving a career high as Max Fist. Manganiello gives what could be a one-note character a lot of pathos. Allowing to see Max's vulnerable side both flies in the face of the antitypical tough hero whilst also helping to make him engaging and even relatable. The younger actors, Skylan Brooks and Zolee Griggs are both amazing in their respective roles and will no doubt be power-houses in the biz if given the chance. Glenn Howerton of Always Sunny in Philadelphia fame hams it up as drug-kingpin The Manager and looks like he is having a blast in the role. Paul Sheer even has a small but bonkers role as a strung out junkie in red speedos.

Archenemy is what I would call an interesting fail. I'm not going to crap all over like some critics and, I do give Adam serious props for taking a stab at creating a high-concept at times surreal superhero film that intersects with a crime story. What overall sinks this movie is the underwhelming writing that never explores it's world or characters enough to be effective. It has the spirit but lacks the polish to help it stack up with other meta-texts that challenge and hold up a a mirror to superhero deconstructions. Certain threads of the narrative either feel glossed over or brought up only to be dropped just as quickly. Adam Egypt Mortimer is a refreshing voice and while I give him credit for the attempt it's hard to look past the lackluster story. It's a shame because I could easily see a good film in here had someone else be given the task of polishing up the screenplay.

Picture: Archenemy for all its shortcomings is a visually interesting film. The 1080p transfer looks fantastic and retains a great deal of detail in terms of locales, sets and textures. Thankfully, things have a nice nature look without an over processed look.

Sound: Archenemy thankfully has a robust DTS 5.1 track. Though movie not as bombastic in terms of sound design than other superhero movies, it still requires a nice big sound experience and we get it. The film has a nice layered and complex sound with dialogue and effects coming through nicely.

Extras: The extras includes a Making Of featurette with cast and crew and some nice behind the scenes footage.