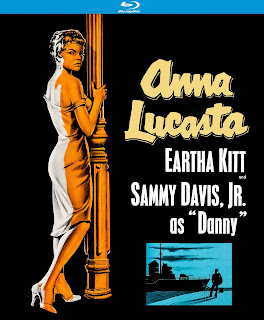 Anna Lucasta (Eartha Kitt) is a black sheep of her family because she earns her living as a prostitute. When a well-to-do friend of the family named Rudolph (Henry Scott) comes to town to find a wife Anna's family decides to hook to pair up. Despite her past her they get married. What should be her happily ever after is ruined by Anna's ex-boyfriend Danny (Sammy Davis Jr) and her spiteful father Joe (Rex Ingram). Anna Lucasta was a play written and performed in the late '40's with an all African-American cast and, later the film version from 1949 featured an all white cast. In 1958 the studio United Artists, formed by actors to by-step the big studios. Basically, it seems to suggest no big studio would make Anna Lucasta with it's originally intended all African American cast.
I talked before about the Hays Code and how by the late '50's and early '60's films slowly chipped away at the strict system until finally in the late '60's it was replaced my the MPAA rating system. I mention this because a movie like Anna Lucasta with themes of prostitution would not have made it past the script stage let alone filmed when the Code was at the height of its power. Now, I have not seen the '49 version nor the playin which its based. But, if I had to guess, the subject of why Anna becomes such a black sheep is most likely more mysterious in the original film version. It's worth noting that the '49 uses a white cast unlike the original play on which it's based. And, the fact that it was only thanks to United Artist that we actually got an all African-American cast is very telling indeed. As for the movie itself, I think its good but certainly flawed.
Director Arnold Laven who was known more for his television work seems to be in tuned with the material and to his credit the movie feels like a real, raw lived in world. The film builds up this human drama to a nearly fever pitch yet, plot-points and characters are neither greatly side-stepped or glossed over and forgotten about altogether. In the end it felt underwritten both in plot and character. Big moments of come out of total nowhere whilst the movie seems to be lacking resolve with major characters such as Rudolph. Now, as I said I have never seen the stage version but it still makes for a movie that has the makings of a real and powerful human story that is left to limp to the finish line.
The purrfect Eartha Kitt, is remembered for not only singing the seminal classic Santa Baby in 1953 but also for donning cat ears and a whip in what many consider the best version of the comic book character Catwoman in the classic 1966 Batman television series. Its easy to forget but Kitt was, in my opinion an incredible actor and in the title role she truly gets to show her range off. Musician Sammy Davis Jr is also stellar in a small but memorable role as Danny. This was Davis's first foray into acting and its damn good.
Lucien Ballard best known for his work on such classics as The Wild Bunch (1969), True Grit (1969) and, The Killing (1956) thankfully adds his brilliant photography helping to open the film up in a honest and gritty way.
I think Anna Lucasta has a lot of good pieces from its all African-American cast giving amazing performers, terrific production design and a stellar score. But, due to lackluster writing (from a screenwriter that most likely didn't understand the material) this is a fairly underwhelming film that had so much promise. According to film historian Robert the film was seemingly doomed from the start tanking at the box office because of according to him thanks to United Artists lack of promotion. This seems to lead one to think even UA didn't have much faith in this project. On a bright note Kitt is divine and worth the price of admission alone.
Picture: Anna Lucasta dazzles in it's new 4k scan. For its shortcomings I will say this is a well shot film and this transfer does justice to Ballard's photography. Black-and-white contrast is well balanced with deep blacks. The image retains a great deal of clarity in sets, locales and clothing.
Sound: Similarly, Lucasta has a very nice DTS 2.0 track. Dialogue comes through nicely with little to no background noise or hiss.
Extras: Anna Lucasta includes an original trailer.
Posted by The Video Attic at 10:12 AM