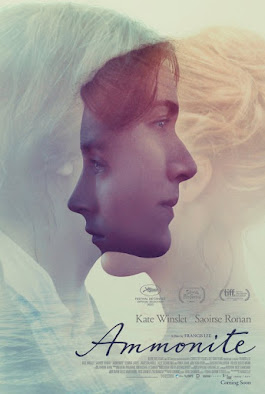 Disclaimer: Universal Studios has provided me with a copy of this film free of charge for the purposes of review. All opinions contained within are my own honest reflections.

British director Francis Lee's debut film God's Own Country (2017) garnered both praise from critics and awards. His follow up film again tackles LGBTQ subject in this sweeping love story. Set in 1840's England this account of the renowned fossil hunter Mary Anning (Kate Winslet) who cares for her ill mother in a small sea-side village. One day a young woman named Charlotte (Saoirse Ronan) comes into her life and the two begin an intense affair.

If I had to sum up how I felt about Lee's Ammonite I would say its something of a mixed bag but ultimately left me feeling hollow. From a technical standpoint the film has a lot going for it. You really get a firm sense of time and place thanks to the rich production design along with  costumes done by Oscar winner Michael O'Connor. The breathtaking photography by Stephane Fontaine gives the film a magic that is hard to describe in words. Kate Winslet and Saoirse Ronan turn in career highlight performances that are, in my humble opinion Oscar worthy. And, its always a win when a Queer love story can be told in a media landscape dominated by cis heterosexual stories. Visually this movie is amazing with both warmth beauty but also this icy blue tones that are wonderfully weaved into the more somber moments Francis crafts.

Though the movie is visually stunning with has powerhouse performances I couldn't help but feel that the movie doesn't really have anything interesting to say that hasn't already been expressed in other films. Worse yet it never feels like it rises above its high-romance set in a repressed Victorian era. Surprisingly, the aspects of the film that I thought was the most interesting was Anning, her work and her reputation among her peers.  I also couldn't help but feel that Mary as a character felt underwritten and maybe even a little on the shallow side.

Ammonite is a movie that really sweeps you up into its world but I just felt frustrated that it never rose above up its paint-by-numbers doomed romance blue-print.

Picture: Ammonite features its 1:85:1 aspect ratio, shot on digital and transferred on 1080p. As I stated in my review Francis Lee's film is visually provocative with beautiful, even transcendent photography. This HD presentation really highlights this work and retains a lot of detail in locales, sets and period costumes. This is certainly one of the better looking blu rays with very little in the way of blur or noise and what you are left with is a clean clear transfer.

Sound: Ammonite has a booming DTS 5.1 track. Right away I could tell that this was a dynamic sound presentation. Music, sound design and dialogue comes through nicely.

Extras The Making of Ammonite (5mins)