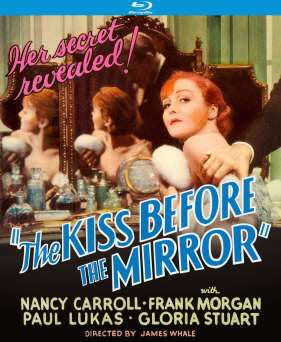 James Whale is probably best known for his horror films like Frankenstein (1931), Bride of Frankenstein (1935) however, I am here to tell you his non-fright films are excellent and well worth exploring. Fans can rejoice as, Kino Studio Classic has provided a rare pre-code Whale film in 2k!  When a doctor kills his wife in a jealous fit, his attorney friend Paul (Frank Morgan) must defend him. He soon suspects his own wife of cheating in this pre-code melodramatic. The Kiss Before the Mirror is a movie that would not have been the same had it been made just a year or so later, after the Hays Code was strictly enforced in '34. Whales was the kind of filmmaker that didn't just enjoy skirting the stuffy Hollywood censors, he positively relished it. And, I loved seeing that cheeky humor and sardonic dry wit is in full display here.
Real talk, Kiss Before the Mirror has it's share of issues and missteps. Namely, I think the movie is incredibly overwrought. Probably too much for its own good but, its a testament to Whale's skill that he could make this work anyways. As always the director had a keen eye for detail, not only in great production design but, in the way he tells the story as much visually as he does with dialogue. Keep in mind the sound was still fairly new at this point. To achieve this breathtaking work, Whale employed cinematographer Karl Freund. Freund photographed everything from Dracula (1931). Metropolis (1927), Key Largo (1948) and, even directed The Mummy (1932) and Mad Love (1935) for Universal. Freund leans his German expressionist lighting and expert camera skills to help give this a film that feels much bigger in scope and more expensive. The other thing that helps this movie is the fantastic cast. Gloria Stuart, who worked with Whale a total of three times (Old Dark House, The Invisible Man and this film) doesn't have very much screen time but really shines nonetheless. Frank Morgan gets to flex is dramatic chops and, the actor brings a lot to the part. The doe eyed Nancy Carroll is also equally great in what could have been a pretty thankless role. In a supporting role Jean Dixon is a sassy firecracker that again, makes the most of her small part. In my opinion this is a lesser Whale outing however, it's still a really fascinating pre-code film.  There is this tag-of-war with gender politics (covered in depth in the commentary) that also keep things interesting. Also Whale adds enough polish to make it still very much worth a watch.

Picture: The Kiss Before the Mirror is another slam-dunk for Kino! Fan's get a nicely handled 2k transfer. Scratches and artifacts are scrubbed clean leaving a nearly pristine print. The film is black and white and the tones are well balanced with deep blacks and a nice contrast. Clearly a lot of work went into this new print and it showcases Freund's photography.

Sound; Kiss Before the Mirror has a nicely done 2.0 track. Dialogue comes through nicely with very little in the way of unwanted distortion.

Extras: Extras include a feature length commentary historian Alexandra Hellar-Nicolas. I've heard other commentaries from Alexandra and, as always, is extremely well researched and prepared. What we get is a lot of great context and subtext within the themes of the film. Thought provoking and well worth the listen!